Coming off of a disastrous season that saw a proud franchise go 37-45 along with missing the playoffs, the Heat look to rebound next season in a big way.

The team will return a starting core that matches up with the very best the NBA has to offer. All five starters were members of the Heat last season—they just never took the court together as one.

Along with the starting lineup, Miami will have a deep bench comprising a mix of battle-tested veterans and young role players. The free agent additions of Amar’e Stoudemire and Gerald Green will improve two of the weakest areas of the team last season—bench scoring and three-point shooting.

While it’s known the Heat will likely improve drastically during the upcoming season, the question becomes, what will each player’s role be for the 2015-16 season?

Let’s take a look at each of the 15 players currently on the roster. 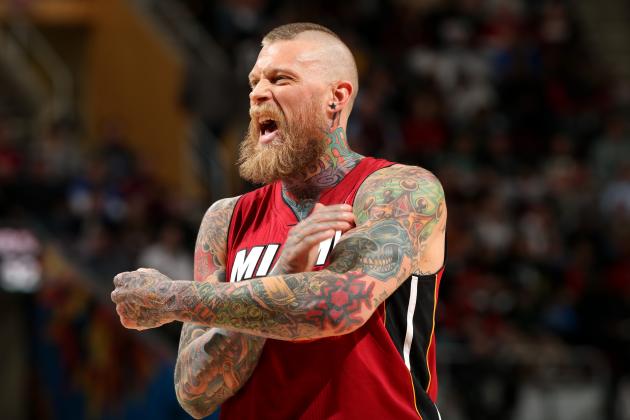 “Birdman” hopes to take flight for a fourth season in Miami. However, Chris Andersen may be a trade piece before the season even begins. With a $5 million salary for the 2015-16 season, and the Heat being roughly $6 million over the luxury tax line, the franchise is still trying to shed costs.

While the 37-year-old center still contributes energy and defense in short spurts, his salary figure and the fact that the Heat are loaded in terms of quality bench players may mean Andersen may have played his final season in Miami.

However, if he does return, Andersen should still see minutes as a backup big who can play both center and power forward. With the addition of Stoudemire and Josh McRoberts coming off of the bench, he likely won’t see the 18.9 minutes per game he averaged last season. He’ll probably see more of the 14-to-15 minutes per game range that he encountered in his first season with the franchise.

That may be a good thing as the tattooed veteran struggled through an assortment of injuries last season en route to only 62 appearances.