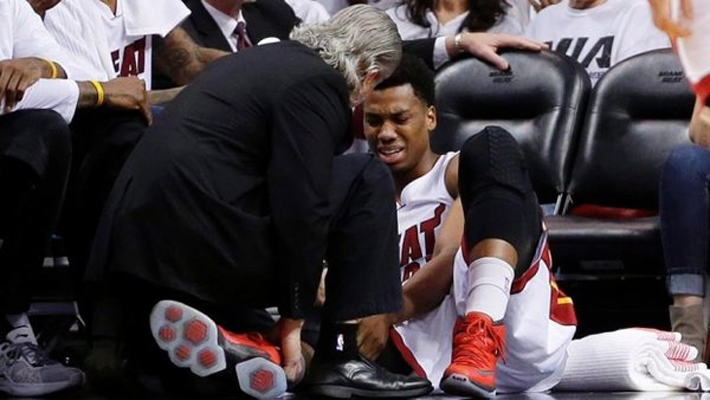 The Miami Heat have officially announced the injury status of center Hassan Whiteside, after the center exited Game 3 against the Toronto Raptors with an apparent knee injury.

The 7-footer is considered “day-to-day” after an MRI revealed a sprained right MCL.

INJURY UPDATE: MRI results on Hassan Whiteside’s right knee confirmed a Sprained Right MCL. He will be listed as day-to-day.

Barry Jackson of the Miami Herald has also noted that the Golden State Warriors’ Steph Curry has missed two weeks after being diagnosed with the same injury and if Whiteside misses that much time, he would miss the rest of the Eastern Conference semifinals and more.

Steph Curry has missed two weeks with a sprained MCL, which is what Whiteside has been diagnosed with.

In other news, it looks like Raptors center Jonas Valanciunas will be missing some time as well as the center has been ruled out for the remainder of the series with a sprained right ankle.

The Raptors announced Sunday centre Jonas Valanciunas will miss the remainder of the series vs. Miami with a sprained right ankle. #RTZ