Report: Only Teams With ‘Dead Money’ Would Consider Trading for Hassan Whiteside 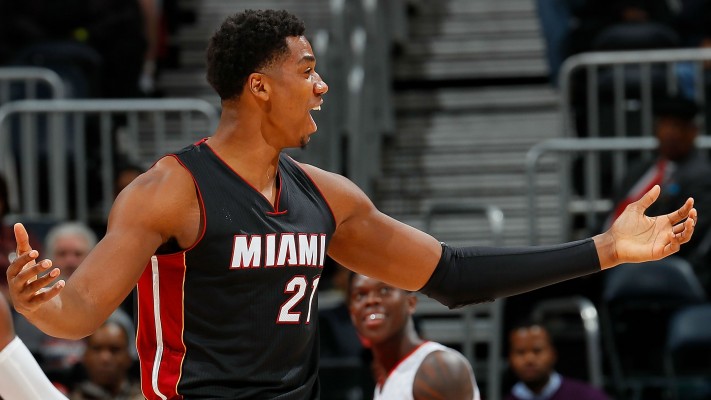 Since the 2017-18 NBA season came to an end, Miami Heat big man Hassan Whiteside has been talked about as a potential trade piece.

While the former NBA All-Defensive Second Team member averaged a double-double last season, it seems his trade value has fallen to an incredibly low level.

According to Chris Sheridan of Sheridan Hoops, who fielded questions about Whiteside on Wednesday, the only teams that would consider trading for the mercurial big man are teams with available dead money.

Potential trade partners, from what I am hearing, are teams with dead money. That is how far his stock has fallen. https://t.co/CMQVvaKIsr

He went on to answer other inquiries and offered greater context into the Whiteside situation.

I disagree. Plenty of teams withvdead money would exchange it for a reclamation project. https://t.co/erPn1CkXRd

Dead money is a euphemism for players on massive contracts who do not play much basketball anymore … Mozgov, Deng, Noah, etc. https://t.co/16GSuhS7O1

No. I imagine they would prefer to hold their max option for a player who is not locked up as long-term as Hassan is, and a player who still wants to exert the effort that earned him a max contract in the first place. https://t.co/29yQTAqPGu

At the beginning of the 2017-18 season, Whiteside was predicted to be one of the key pieces on the Miami roster. Team officials and fans alike had hoped that he would live up to the four-year, $98 million contract he signed in July 2016. He went on to have numerous strong performances throughout the season and averaged 14.0 points and 11.4 rebounds per game.

Still, questions were raised about his work ethic and commitment throughout the season, and he was an off-court distraction not only during the regular season, but during the Heat’s playoff series against the Philadelphia 76ers as well.

At one point in time it seemed like Whiteside was the future of the Heat organization. It now increasingly seems that the only way he will remain on the Heat in the long-term, is if they simply cannot find another team to trade him to.
[xyz-ihs snippet=”HN-300×250-TextnImage”]