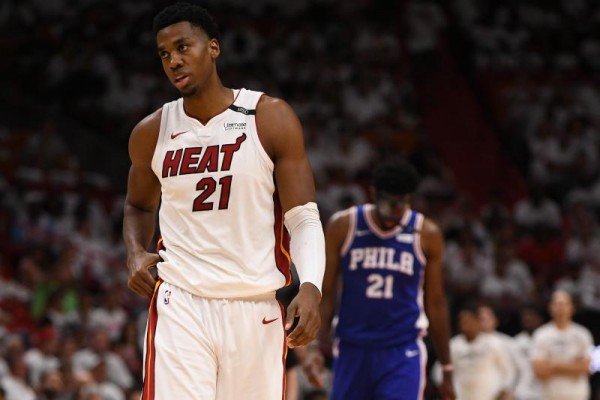 Since the Miami Heat‘s 2017-18 season came to an end, players and coaches alike have chimed in on their opinions regarding the recent drama surrounding big man Hassan Whiteside.

Now, the latest member of the Heat organization to join the conversation is team president Pat Riley. During his postseason press conference on Monday, Riley said that Whiteside was not prepared for their playoff series against the Philadelphia 76ers.

Riles says Whiteside wasn't ready for the playoffs, mentally or physically, and says Bracegate played a role in that.

Riley says Whiteside was not in great shape for playoffs.

Riley continued to say that he believes Whiteside is going to have to make a change to access his potential. He later added that he agreed with Heat head coach Erik Spoelstra‘s decision to limit the 7-footer’s minutes in the playoff series based off of his performances.

Riles on Hassan: "He's going to have to do something to change, because he's a hell of a player."

Riley on Spo's decision to limit Hassan's minutes in the playoffs: "I would have taken him out of the game too the way he was performing in some of those games."

Before the series, fans were hoping that Whiteside was going to replicate the success he had enjoyed against the 76ers during the regular season. By the end of the five-game series, however, Whiteside failed to make much of an impact on either side of the ball, averaging just 5.2 points and 6.0 rebounds per game.

While Whiteside is still under contract for one more season before he can choose whether or not he wants to decline his 2019-20 player option, it is quite possible that the Heat will look to trade him this offseason. Considering how poorly he played in the playoffs, and how many issues he has caused off the court, it is unclear what Miami could expect in return.

For the time being, all fans can do is wait to see what happens to the talented but mercurial center. Based on Riley’s current opinion of him, it seems Whiteside’s days in South Florida may be numbered.
[xyz-ihs snippet=”HN-300×250-TextnImage”]