Hassan Whiteside Speaks Out on His Lack of Fourth-Quarter Minutes 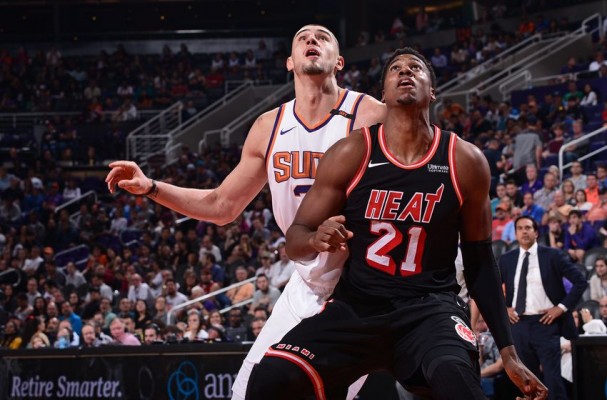 Hassan Whiteside has been making quite the impact since his return from a left knee bone bruise. He has shown steady improvement since he returned to the court back in late December and is averaging a double-double in the Miami Heat‘s last five games.

The vast majority of that production hasn’t been coming in the fourth quarter, though. In five of the last ten games, Whiteside hasn’t played at all in the final frame, including in Monday’s 119-111 loss to the Chicago Bulls.

The most he has played in a fourth quarter since his return was the 7:44 he played last week in a win over the Indiana Pacers. In the rest of the games he has played, he has averaged between five and six minutes in the fourth period.

Whiteside is arguably the closest thing the Heat have to a bonafide star on their roster right now. When asked about his lack of minutes in the fourth quarter, however, he doesn’t seem to be expecting any kind of star treatment.

“It’s whatever Coach Spo (Erik Spoelstra) wants,” Whiteside said according to the Palm Beach Post’s Tom D’Angelo. “That’s what Coach Spo wants to do, that’s the lineup he wants to go with. … he thinks is going to get us the win. I can’t do nothing about it.”

The Heat were outscored by 20 points during the 19:51 that Whiteside played in Monday’s loss. Much of that success came from the Bulls’ ability to hit three-point shots during the game. While guarding the deep ball may seem like a weakness for the shot-blocking center, he didn’t seem to think it played a factor in his lack of minutes at the end of Monday’s game.

“I definitely feel comfortable (guarding players on the perimeter),” Whiteside said. “I didn’t have to guard any shooting bigs. They put Robin Lopez in every time I came in, I guess for boxing out. So I don’t have no problem with it, but it’s up to Coach Spo.”

While Spoelstra’s decision to keep Whiteside on the bench late in the game may seem like an indictment, he gushed over his big man’s recent performance in Sunday’s win over the Milwaukee Bucks.

“I actually don’t care about his double-doubles at all,” Spoelstra said. “It has nothing to do with that. Sometimes he gets confused by that barometer. It has everything to do with winning plays and making an impact to help your team win.

Whiteside has all the potential to be an old-fashioned bully in the post that few teams truly have. In the past, he has shown signs of frustration regarding a lack of minutes when the game is on the line, but his recent acceptance of his role depending on matchups has shown a great amount of maturity.

Despite Monday night’s loss, the Heat are humming. They have won 10 of their last 13 games, and currently sit at fourth place in the Eastern Conference. If Whiteside can continue improving both in the fourth quarter and throughout the game, the Heat could end up as a very dangerous team come playoff time.
[xyz-ihs snippet=”HN-300×250-TextnImage”]