Report: Many Within Heat Organization Want to Trade Hassan Whiteside 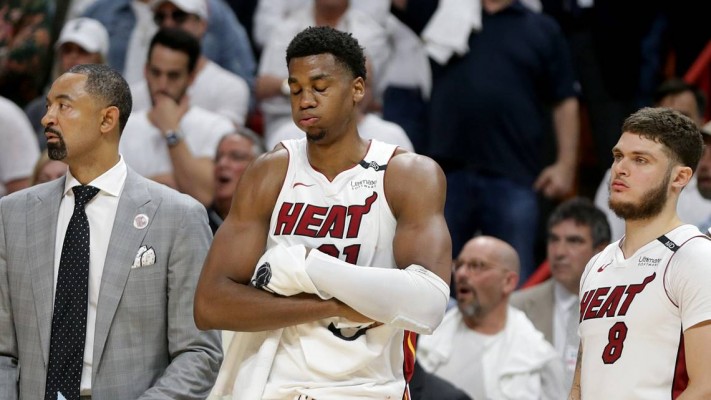 The idea of Miami Heat center Hassan Whiteside playing with the team next season is something that many in the team’s organization apparently would like to eliminate by dealing him away to another team. However, being able to make that a reality is complicated due to Whiteside’s huge contract over the next two years and the changing nature of the game that’s reduced the importance of a traditional center in a team’s lineup.

Barry Jackson of the Miami Herald looked at the situation and offered this assessment:

“There is strong support among numerous people inside the Heat to trade Hassan Whiteside, and the question this offseason becomes this: To what measures will Pat Riley go to dump the two years and $52 million left on his contract.

“Amid his public comments that he would intervene in the Whiteside/Erik Spoelstra disconnect, Riley is now mulling what to do with Whiteside, according to someone close to the situation.”

At his best, Whiteside offers the Heat a player who can put up double-double numbers every night and swat away plenty of opposing shots. The problem is that the center isn’t consistent in his play and doesn’t appear at times to be motivated to offer his best effort. In addition, teams that went small against the Heat had much greater success when Whiteside was at center than when either Bam Adebayo or Kelly Olynyk were in that spot.

Despite Whiteside’s knack for blocking shots, Jackson also offered statistics from this past regular season which reduce that value:

“According to NBA.com, players guarded by Whiteside shot 47 percent this season, which ranked 39th among all centers who played at least 41 games. By comparison, Al Horford and Joel Embiid allowed 40.9 percent. The Heat’s Adebayo allowed 42.3 percent.”

The intervention of Riley, who hasn’t publicly stated that Whiteside is on the trading block, comes with the caveat that Whiteside has to be willing to adapt his game:

“That problem is that he’s going to have to do something to change because he’s a helluva player,” Riley said. “You’ve got [Steven] Adams. You’ve got [Clint] Capela. You got Jonas Valanciunas. You got DeAndre Jordan. You’ve got [Andre] Drummond. You’ve got Hassan. You’ve got these quintessential sort of centers that are being forced to play a certain game because the game has changed and there’s only one or two or three teams that can play that game, because three or four transformative players can make that game effective. So, how do we make him effective?

“That’s what it is. How does he make himself effective? To do the things he needs to do — defend, rebound, shot blocking, all of those things that he did that we fell in love with the first year, second year? He had a bad year this year. He’s got to come back strong next year. I’m going to try to help him as much as I can. I’m going to try to help the both of them so we can keep him on the court 30 minutes a game. But he’s got to help himself.”

Trading Whiteside won’t be easy, unless the Heat are essentially willing to give him away for next to nothing. Without the guarantee of improved play from him, his contract becomes an albatross for the team that prevents them from going after key free agents over the course of the next few seasons. Without some additional talent, Miami may be unable to take the next step in striving for an NBA title.
[xyz-ihs snippet=”HN-300×250-TextnImage”]