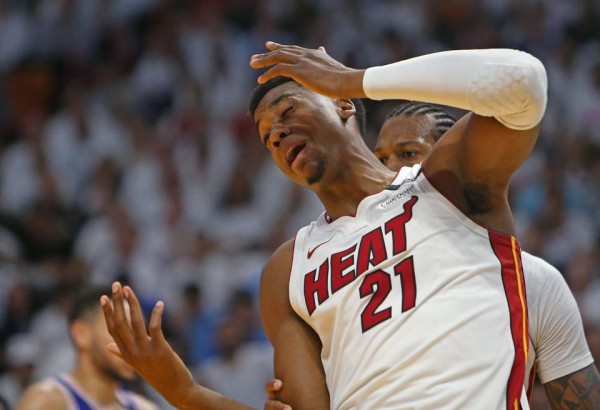 The Miami Heat lost by a double-digit margin in their must-win Game 5 matchup against the Philadelphia 76ers on Tuesday, and Hassan Whiteside‘s dismal performance was arguably a big reason why.

In what was likely one of the biggest games of his career, the 7-foot center played 10 minutes of uninspired and disengaged basketball as he watched the Heat’s 2017-18 season come to an end.

Following the game, instead of looking inwards at how he could have improved his performance, he instead lashed out at his team, complaining about a lack of minutes he clearly believes he had earned.

He was then asked if he planned to talk about the issue with Heat president Pat Riley and head coach Erik Spoelstra:

“It’s definitely something you can discuss with those guys,” said Whiteside.

While it may appear that Whiteside has a point regarding a lack of opportunity, looking a bit deeper into his on-court performances makes it clear why he spent so much time on the bench this season. The Heat were outscored by 75 points with Whiteside on the court during the regular season, and by 26 points with him on the court in the series against the 76ers.

Despite that, Whiteside seems convinced that he should have played far more minutes than he did in his team’s final game:

“He didn’t tell me nothing,” he said of Spoelstra when Whiteside was pulled in the third quarter wth three fouls. “I thought I was going to go back in, but I didn’t.”

There are many decisions that the Heat organization will have to make this offseason, and one of those decisions will certainly be about Whiteside’s future. Given his tendency to create headlines off the court, and his inability to consistently make a positive impact on it, it’s quite possible that he will be wearing a different jersey come next season.
[xyz-ihs snippet=”HN-300×250-TextnImage”]