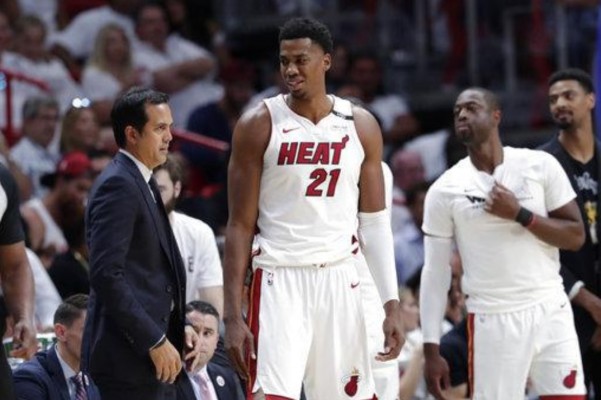 One of the biggest stories surrounding the Miami Heat this offseason is whether or not they will be able to trade away center Hassan Whiteside. According to reports, many within the Heat organization are in favor of trading Whiteside. However, the 28-year-old’s trade value has reportedly hit a low point, which would make offloading him a hard task for the Heat.

Barry Jackson of the Miami Herald wrote about some new details that have emerged regarding a potential Whiteside trade.

Jackson wrote that, according to a source, the odds to trade Whiteside are 50-50 at best because of the center’s low value. Jackson also mentioned that although the Heat are unsure of what is going to end up happening, they plan to be ready for the possibility that Whiteside returns for a fifth season in Miami.

It was also stated in the article that Whiteside has not asked for a trade and that the Heat want to make sure that the relationship between Marshall University product and head coach Erik Spoelstra would be able to work:

“Meanwhile, an NBA friend of Whiteside said Whiteside has not asked for a trade and is very much open to making it work here, even after expressing dissatisfaction with his playing time on multiple occasions last season. Though he wants to play more, he still likes playing in Miami. The disagreement with Erik Spoelstra regarding usage is professional and not personal.

“The Heat remains committed to take steps to ensure that Whiteside and Spoelstra are on the same page so that the relationship can work if Miami isn’t able to trade him, a person briefed on the situation reiterated in recent days.”

Four potential trade partners were mentioned in the article. Those teams are the Milwaukee Bucks, Dallas Mavericks, Portland Trail Blazers and Sacramento Kings.

Three of those four teams have shown interest in Whiteside at one point in his career. The Bucks were reportedly interested in him during last season’s trade deadline, according to Basketball Insiders’ Steve Kyler. The Mavericks met with Whiteside when he was a free agent in 2016, offering him a max contract before he decided to re-sign with Miami. As for the Trail Blazers, they also pursued him during the 2016 offseason and he said, in December of 2016, that he would have gone to Portland had he not returned to Miami.

Last season, Whiteside averaged 14.0 points, 11.4 rebounds and 1.7 blocks per game. However, when the playoffs came around he played a lot less and did not have any real impact in the Heat’s series loss against the Philadelphia 76ers. In that series he averaged 5.2 points, 6.0 rebounds and 1.2 blocks in only 15.4 minutes per game.

Although he has publicly complained about his playing time, liked an Instagram post about him being traded, and been fined for going on an expletive-laced rant, Whiteside might still be playing for the Heat next season. If that ends up being the case, both Whiteside and the Heat will need to settle their differences in order to make sure that the Heat are able to compete for a playoff spot once again.
[xyz-ihs snippet=”HN-300×250-TextnImage”]