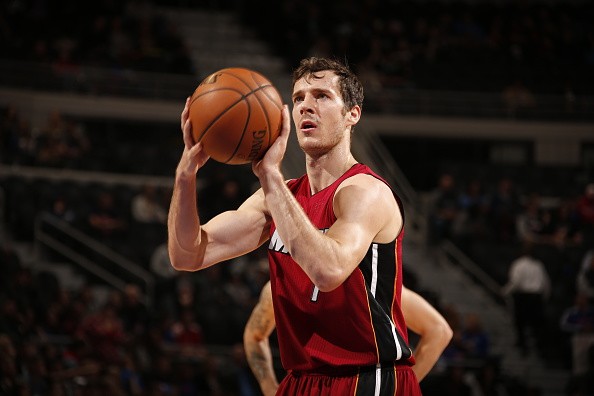 The struggles of the Miami Heat during the first quarter of the 2016-17 season have been an exercise in frustration for team management, coaches, players and fans. A 9-19 start may be the precursor to a long season, which has led many people to conclude that a major rebuilding effort needs to commence. That’s something that they think will include a trade of starting point guard Goran Dragic.

However, Steve Kyler of Basketball Insiders believes that no such plan is currently in place:

“Miami’s Goran Dragic continues to surface as possibly the biggest fish to be had, but sources with the Heat continue to say they are not ready to blow the team up; until that happens, Goran is not on the market. The prevailing belief outside of Miami is at the deadline, the Heat will explore Dragic’s trade value in an effort to remove his salary from their books for a run through free agency this summer when Chris Bosh’s deal is expected to be off the books as well. Miami has kept no secret that they are rebuilding and would like to get a few more draft picks. Heat sources said recently that keeping Dragic as the veteran leader wouldn’t be a bad thing, but conceded he might return a ton of value, which lines up with the league belief that the Heat would explore moving him at or around the deadline.”

The 30-year-old Dragic was traded to the Heat on Feb. 19, 2015 from the Phoenix Suns, part of a three-way deal that also included the New Orleans Pelicans. Entering Tuesday night’s game, he’s played in 121 games for Miami, averaging 15.6 points and 5.9 assists per game.

In 23 games this season, Dragic has enhanced those numbers, which has helped increase his trade value. He’s currently averaging 19.1 points and 6.7 assists per contest, while shooting 41 percent on his 3-point attempts.

Following the 2014-15 season, Dragic signed a five-year, $86 million deal with Miami that’s paying him $15.89 million this year and $54.3 million over the remainder of the contract.
[xyz-ihs snippet=”Responsive-ImagenText”]