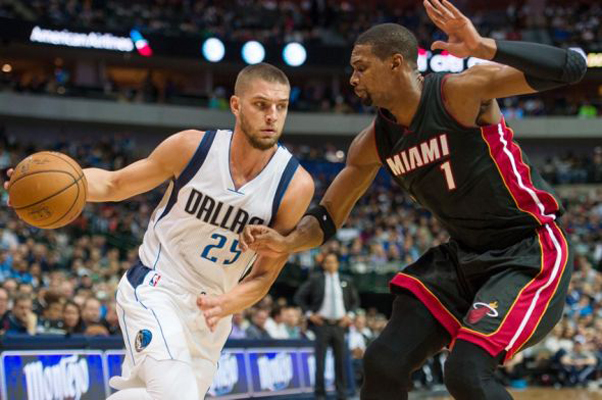 The Miami Heat have a lot of work to do this offseason.

Their first order of business will be to lock down both Dwyane Wade and Hassan Whiteside. Both players played an integral role in helping the Heat reach the playoffs without Chris Bosh last season. After that, the Heat must scour the free-agency market in order to find the perfect pieces that will help the team contend once again.

Kevin Durant is obviously the most coveted free agent on the market this offseason, but experts have already predicted that it’s looking like a long-shot, at best, that the Heat will sign the 6’11” superstar. If Durant does not work out, the Heat must actively pursue another small forward via free agency that can help them get over the hump. Luol Deng is a free agent this summer and if he leaves Miami, the Heat will need to fill his position promptly. One player that would work well for the Heat at small forward is Dallas Mavericks player Chandler Parsons.

Recently, John Buhler of FanSided stated the Parsons would be a perfect fit in Miami and that the team should pursue signing him to a deal:

“Riley could look to court native Floridian Chandler Parsons to play small forward for the Heat in 2016-17,” Buhler writes. “He’ll likely give the Heat better production than they are getting from aging veteran in Deng, and would provide the Heat with another player to build around with point guard Goran Dragic once both Wade and Bosh exit their primes.”

Parsons averaged 13.7 points, 4.7 rebounds, and 2.8 assists per game in his injury-riddled 2015-16 campaign with the Mavericks. More importantly, he shot 41.4 percent from the three-point line. Miami desperately needs three-point shooters now that the NBA has transitioned to more of a long-ball league. Last season, they were amongst the league’s worst three-point shooting teams, which was a major reason they were unable to make it past the Toronto Raptors in the Eastern Conference semifinals.

If Pat Riley can manage to get a deal done with Parsons, it would instantly make Miami contenders in the East again. Parsons is a versatile forward who is only 27-years-old and in the prime of his career. Though there are a number of free agents Miami will sit down with this summer, Parsons should unquestionably be high on their radar.
[xyz-ihs snippet=”Responsive-ImagenText”]