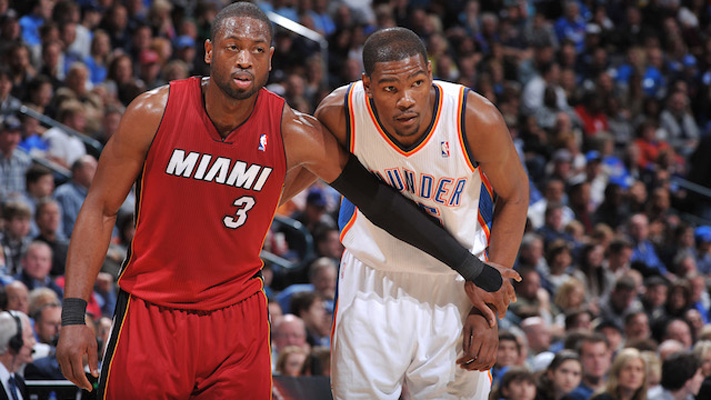 Ever since reports came out that Kevin Durant may be interested in signing with the Miami Heat, fans and experts alike have been curious as to how the money situation would work if the Heat were to re-sign Hassan Whiteside and bring back Dwyane Wade.

Both players are highly valuable in Miami. Wade has achieved greatness with the Heat and is Miami’s prodigal son, while Whiteside is vital to what the franchise is trying to accomplish moving forward and an integral piece of what Pat Riley and company need to regain relevancy in the East. Riley has already stated that re-signing Whiteside is the team’s number one priority, though many believe signing Durant takes precedent over reeling back in the seven-foot shot blocker.

However, according to Dan Le Batard of of ESPN, the team also is well aware that the chance of acquiring the prized scorer are slim.

Barry Jackson of the Miami Herald also touched on the subject:

“Though the Heat fully intends to make a run at Kevin Durant in July, it privately knows that Durant signing with Miami this summer is a longshot. That made it easier for Riley to say that Whiteside is the priority this summer.”

Whiteside will most likely receive max-contract offers from teams around the league and Riley has publicly stated that Wade’s value to the franchise is nearly immeasurable. This means that the $48 million or so in cap space that the Heat will possess this offseason will likely go towards getting those guys paid, with only a little left over to lure Durant.

Now, here’s the new, and perhaps more pressing issue. Even if the Heat dig into the luxury tax in attempts to pay Durant, would he even want to leave Oklahoma City at this point?

Durant and the Thunder are absolutely dominating the Golden State Warriors and are one win away from playing in the NBA Finals this year. It seems increasingly hard to believe that Durant will wish to leave OKC now that things are finally clicking with him and Russell Westbook and the team as a whole. As sad as it is for Heat fans to admit, it’s starting to look like the chances Durant ends up in Miami are becoming slimmer as we speak. That’s not to say it’s impossible.

Who knows how Durant will feel about his precious Thunder if they are bounced yet again from the playoffs?  If anyone can come down from a 3-1 deficit, it’s the Golden State Warriors. Or perhaps, the Thunder make it to the finals and lose to the Cleveland Cavaliers.

Either way, each scenario would represent a monumental defeat at this point and could only fuel Durant’s ambitions to move on and try and compete for a title elsewhere. Granted, it’s a longshot right now, but when it comes to Durant and today’s NBA, longshots are increasingly commonplace and not unlikely to land.

If Miami could just get Riley and Durant in a room together, the chances of them coming to terms on a deal increase exponentially. At this point, the hard part will be getting Durant to turn his attention away from the Thunder just long enough so that he considers other options. It will be hard to tell if that’s even possible if his current team goes on to win the title this season, but like the great Kevin Garnett once said, “anything is possible.”
[xyz-ihs snippet=”Responsive-Ad”]