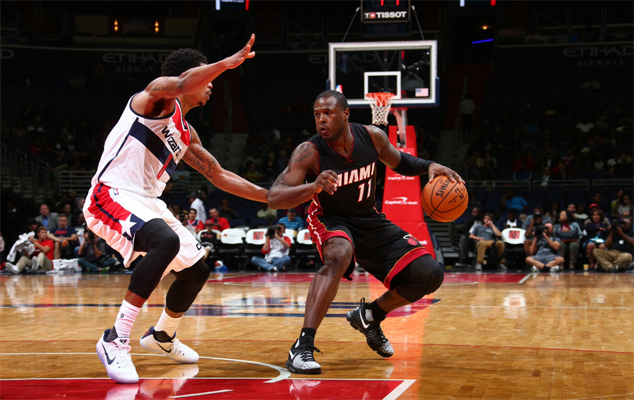 A lot has been said about the similarities between current Miami Heat guard Dion Waiters and former Heat superstar Dwyane Wade.

Apart from the fact that they share the same initials, the two 6’4″ shooting guards are dynamic scorers and both have a relentless ability to attack the rim. Their similar playing styles have led many to proclaim that Waiters will take on the role of Wade, who left the Heat for the Chicago Bulls in July.

When asked about the comparisons, Waiters didn’t shy away:

D-Waiters on how some fans say he looks like D-Wade: "I’ve been told that a lot. That's why it's weird. He’s one of my favorite players."

Waiters, 24, signed with the Heat over the summer. The former Syracuse University star was selected fourth overall by the Cleveland Cavaliers in the 2012 draft and played for them for the first three years of his career. After appearing in 33 games with LeBron James and the new-look Cavs in 2014, Waiters was traded to the Oklahoma City Thunder, where his production immediately dwindled.

Yet, even next to MVP-caliber scorers Kevin Durant and Russell Westbrook, the guard put up nearly 10 points a game. With the right team and opportunity, there’s no doubt Waiters can be a star in this league.

As seen in Miami Herald sportswriter Manny Navarro’s tweet below, Waiters has studied and continues to look after Wade’s game.

Waiters on Wade: "I always studied what he did. He had an impact on this game: champion, Hall of Fame. Somebody I just continue to look at."