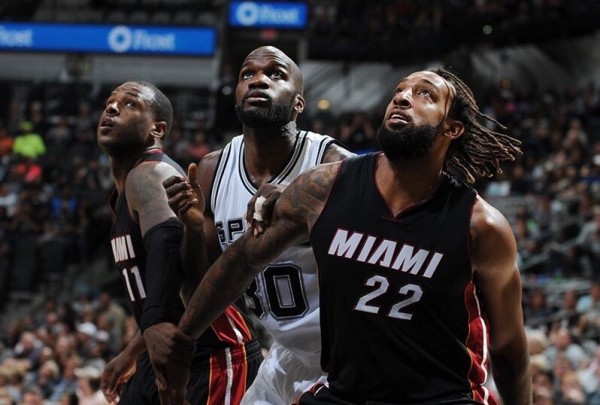 (San Antonio, TX) – With an impressive effort on defense and a balanced offensive attack, the Miami Heat (3-1) did a great job of keeping the San Antonio Spurs (3-2) in check on Friday night with a 108-100 preseason victory at AT&T Center.

Led by its defensive tenacity, Miami was able to force 19 San Antonio turnovers on the evening, which is quite surprising for such a highly disciplined squad under legendary Spurs head coach Gregg Popovich.

“It feels good because that was our main focus. When we went to the Bahamas, those five days were predicated on trying to get a defensive identity. We’ve got so many guys who can score the ball, so if we can get stops and get out in transition then it kind of best suits everybody,” Heat shooting guard Tyler Johnson said after the victory.

After they headed into halftime with a 55-48 lead over the Spurs, the Heat were able to maintain a double-digit lead for most of the second half and were ahead by as many as 23 points early in the fourth quarter.

Six Heat players scored in double figures on Friday night, led off the bench by shooting guard Tyler Johnson with his 17 points (6-of-8 from the field and a perfect 4-of-4 shooting from behind the arc), five assists, four rebounds and one buzzer-beater at the end of the third quarter from way downtown.

“He’s taken a step forward with his control, with his leadership, and that has really helped him in his play,” Heat head coach Erik Spoelstra said of Johnson. “He makes a lot of plays to help you win.”

With 15 points apiece, the Heat got solid offensive production from starting small forward Justise Winslow (6-of-12 from the field), starting shooting guard Dion Waiters (5-of-9 from the field) and newly-acquired power forward James Johnson (6-of-10 from the field with three boards and three assists), who had his best all-around game of the preseason.

Also in double figures for the Heat was rising star center Hassan Whiteside, who had just another typical day at the office with 12 points, nine rebounds and one blocked shot in just 22 minutes of action. Whiteside had one of the night’s most memorable plays for the Heat in the third quarter, as the 7-footer drove into the lane to throw down a dunk over Spurs center Pau Gasol.

For the Spurs, All-Star small forward Kawhi Leonard and backup center Dewayne Dedmon had 11 points apiece while Gasol, point guard Tony Parker and shooting guard Jonathon Simmons each had 10 points of their own.

Up next, the Heat will play the Minnesota Timberwolves at KFC Yum! Center in Louisville, Kentucky on Saturday night. The contest, which is scheduled to tip off shortly after 7:30 pm ET, will be broadcast only on the radio on AM 790 The Ticket.
[xyz-ihs snippet=”Responsive-ImagenText”]