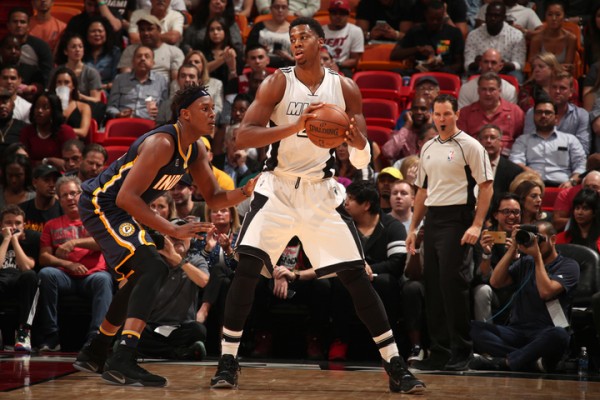 (Miami, FL) – For the first time this season, the Miami Heat (9-17) won two consecutive home games as they shut down the Indiana Pacers (13-13) by a score of 95-89 on Wednesday night at American Airlines Arena, holding the Pacers to just 10 points in the fourth quarter.

Following Monday night’s 112-101 victory over the Washington Wizards, the Heat put together another impressive performance to knock off star forward Paul George and the Pacers.

In similar fashion to Monday’s game against the Wizards, the Heat again found themselves down by one point at the end of the third quarter and managed to come up clutch in the final frame to nab a hard-fought win.

With only 20 seconds left in the fourth quarter and the Heat leading 92-89, Indiana’s failed attempt to steal the ball away on defense was all the Heat needed as guard Josh Richardson threw down a two-handed dunk with 12.9 seconds left to ice the game.

“I guess that’s what you could expect with a Heat-Pacers game, regardless of who the faces are. It was good to see us grind out another close one in the fourth quarter,” Heat head coach Erik Spoelstra said in his postgame press conference.

Miami was led by star center Hassan Whiteside, who had his fourth career 20-20 game as he went off for a game-high 26 points (10-of-16 from the floor and 6-of-11 from the charity stripe), 22 rebounds and two blocked shots. By halftime, Whiteside had already put up an eye-opening stat line with 20 points and 14 boards.

By the game’s end, the Heat as a team outrebounded the Pacers by a whopping 58-38 margin.

“He was dialed in,” coach Spoelstra said of Whiteside. “When he’s playing at a high level, we’re a completely different basketball team and it’s obvious for everybody to see. That’s a big responsibility to have and that’s what great players want. They want to shoulder that burden.”

For Miami, five players scored in double figures on Wednesday night with three of those players coming off the bench. Guard Tyler Johnson had 15 points, five rebounds, four blocked shots and three assists, while forward James Johnson was very impressive as well with 14 points, six assists and three boards.

Heat guard Rodney McGruder, who had two points in just 18 minutes as a starter on the night, praised James Johnson for his performance on the court.

“He’s a different caliber player, man,” McGruder said of his teammate. “The things that he can do: he can pass the ball, shoot the ball, and he’s athletic. He’s God’s gift right here, for real.”

Heat small forward Justise Winslow returned from a 16-game absence due to a left wrist injury and scored two points (1-of-5 shooting from the field) in 21 minutes of action off the bench.

“I just want to be out there with my guys. I trust the process, I did the rehab and all that. So it was good to get back out there and I guess help the team win,” Winslow said. “It was great. This is what I love to do. It’s been horrible and it’s sucked being out, to be honest. I wasn’t happy with my performance, but it was good to be out there.”

Up next, the Heat will play the third game of their six-game homestand on Friday night when they host the Los Angeles Clippers (19-7) at American Airlines Arena. The contest, which will tip off shortly after 8:00 p.m. ET, will be broadcast live locally on Fox Sports Sun.
[xyz-ihs snippet=”Responsive-ImagenText”]

The Miami Heat have signed rookie forward Precious Achiuwa to a deal amounting to $12.5 million, according to a...