Miami Heat Get Steal of Night with No. 10 Pick Justise Winslow 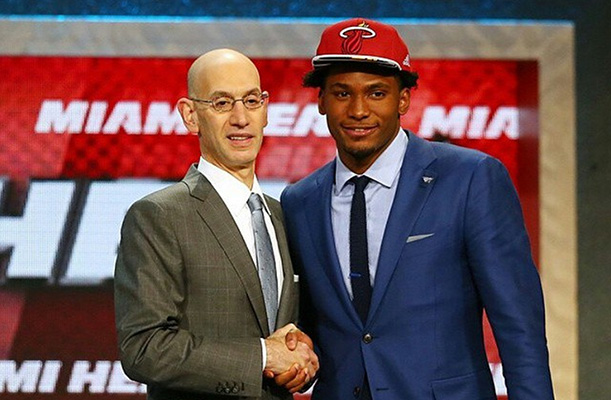 The Miami Heat perhaps got their future starting small forward with the No. 10 overall pick during Thursday night’s 2015 NBA Draft.

Pat Riley drafted Justise Winslow out of Duke University with the Heat’s first pick, filling a need at the small forward position. Winslow won a National Championship with Duke in his freshman season. He averaged 12.6 points on 49 percent shooting from the field and 41 percent from beyond the arc. Many have pegged him as a Metta World Peace clone.

The Duke product had the following to say about being drafted by Miami:

“It feels great. To go to an organization like the Heat is a blessing. I’m very excited. I’m just ready to get down there and gel with the guys. I have a bright future.”

With Luol Deng holding a player option for the 2015-16 season, it is a question mark whether the 30-year-old veteran will return to the Heat for next year. Deng has until June 29 to exercise his $10.1 million option, or become a free agent.

In Winslow, they get a 19-year-old kid who could be ready to step in as the starter at small forward from day one. He’s an athletic and versatile defender who is adept at scoring on the fastbreak. Winslow also excels as a defender and would be perfect as a teammate who doesn’t need the ball to succeed.

The small forward was projected to go as high as the No. 5 pick, but unexpectedly fell to the Heat. Miami did not even work out Winslow during pre-draft workouts. Winslow didn’t seem to be negatively affected by his fall in the draft process:

Outside of that obligation, the Heat also owe the Phoenix Suns a pair of first-round picks for the Goran Dragic trade completed in February.

For now though, Winslow represents a positive vibe for a franchise that was in desperate need of one.
[xyz-ihs snippet=”Responsive-Ad”]