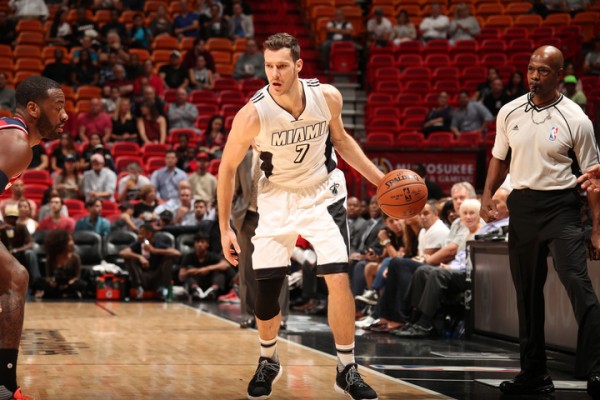 (Miami, FL) – Goran Dragic’s season-high 34 points helped put an end to the Miami Heat’s five-game losing streak as they held on for a 112-101 victory over the Washington Wizards at American Airlines Arena on Monday night.

Dragic scored 13 in the final quarter and reached a new career-high in a Heat uniform with the 34 points on the night. The Heat led 96-93 at just under the eight-minute mark, with Dragic scoring eight of his points the rest of the way. That helped Miami push their lead into double-digits during the final minute.

“Everybody was open and willing to contribute however they could and whatever that meant,” said Heat head coach Erik Spoelstra. “If that meant coming out of the game and supporting your teammates. We went to a lineup I don’t think we’ve ever played before, but guys understood it and that group gave us momentum and we were able to take the lead and build on it. It was great energy playing JJ (James Johnson) at the 5, but the guys that weren’t in  the game were trying to infuse positive energy.”

Adding five rebounds and five assists, Dragic was joined on the offensive front by Hassan Whiteside, who collected yet another double-double with 17 points and 16 rebounds. Four other Heat players, led by Johnson, also scored in double figures. Johnson finished with 14 points, while Josh McRoberts grabbed eight boards and handed out five assists.

“I just feel comfortable, playing at home, sleeping in my own bed,” Dragic said. “I’m enjoying it, but it’s hard because we’re not winning. Tonight’s game is a good start for us and we need to win as much as possible.”

First-quarter action was primarily back-and-forth between the two teams, with Washington managing a 29-28 lead by the time the quarter ended. That served as a warmup for the Heat as they connected on 59 percent of their outside shots during the second period.

The Wizards led 43-37 when the Heat put together a 22-10 surge over the final five minutes of the first half to turn a six-point deficit into a 59-53 advantage. Dragic led the way with eight points during the stretch, while Rodney McGruder added five to the effort.

“On the past road trip, he’s been extremely aggressive, and when we’ve had to play him too many minutes, he started to get worn down at the end of games,” Spoelstra said about Dragic. “He’s in a good place now. We want him to make a lot of plays for our team, we have great confidence in him.”

The third quarter began strong for Miami as it boosted its lead up to 10 at 65-55 with 10 minutes to go in the period. At that point, Washington bounced back with a 25-10 run to eventually lead by five at 80-75, before ending the quarter with a 82-81 advantage. The Wizards had the hot hand throughout the period, connecting for 57 percent from the field. Meanwhile, the Heat managed to only hit 40 percent of their attempts.

The majority of Washington’s offense was provided by its starting backcourt of Bradley Beal and John Wall. The duo combined for 59 points, with Wall hitting for 30 and Beal, 29. Bench play has been a particular weak spot for Scott Brooks’ squad as Washington’s bench was only able to manage 18 points during the game, half of the 36 points provided from Miami’s four reserves.

“We need to protect our home court and we finally gets some guys back and that helped a lot,” Dragic said immediately after the game. “Now, we need to continue to build our habits and try to protect home.”

The Heat will be back in action for the second of six consecutive home games on Wednesday night when they host the Indiana Pacers in a game that will tip off just after 7 p.m. That start time is necessitated by ESPN’s coverage of the contest.
[xyz-ihs snippet=”Responsive-ImagenText”]