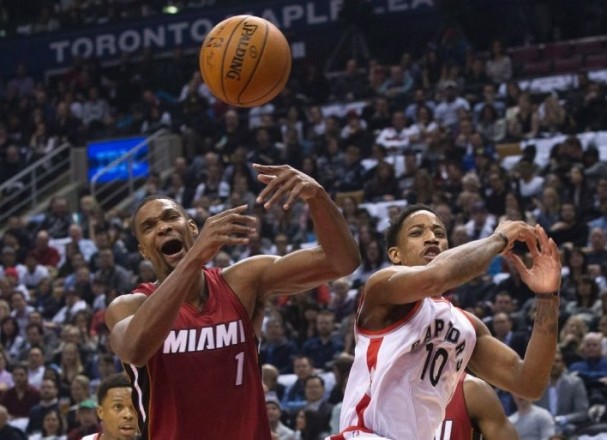 (Toronto, ON) – Falling behind early and never being able to catch up offered more of the same for the Miami Heat as they dropped their fourth straight game and suffered their seventh loss in their last eight contests with a 101-81 loss to the Toronto Raptors on Friday night at Air Canada Centre.

Chris Bosh and Dwyane Wade provided over half the offensive support on the night for Miami, scoring 26 and 22 points, respectively. The duo were the lone Heat players to score in double figures. Bosh added seven rebounds, while Wade handed out four assists,

Heat head coach Erik Spoelstra commented after the game about Wade’s troublesome shoulder amidst all the other health issues the team is currently saddled with:

“We just want to make sure he’s not taking steps back. Right now it doesn’t bother him.”

Wade was more concerned about the team as a whole:

“We miss our guys,” said Wade. “They guarantee us nothing of course. But we miss them.”

The latest addition to the list was Hassan Whiteside, who sat out the game with a strained left hip. Starting in his place was Amar’e Stoudemire, who tallied two baskets in the first five minutes, but added only four more points for the rest of the contest. He had five rebounds, but no blocked shots.

Attempting to pick up the slack on the boards was the duo of Udonis Haslem and rookie Justise Winslow. Haslem ended the night with nine boards and Winslow grabbed eight.

Spoelstra spoke about the trying times the team is enduring:

“Everybody wants to be out there for the other guys and we need whoever we can get out there,” said Spoelstra. “This is where we develop collective character. We have enough. It’s not like I play 15 guys.”

The tone for the game was set early as Toronto scored the first six points and Miami never got within four the rest of the contest. Indicative of the team’s luck on the night, guard Tyler Johnson stole the ball in the latter part of the first quarter and was en route to a dunk. However, his attempted slam bounced off the rim and Johnson was called for offensive goaltending.

The Heat also had no luck in the first half defending Toronto, who put up 60 points and connected on seven three-pointers. The main weapon in their arsenal was guard DeMar DeRozan, who scored 22 in the first two quarters and finished the evening with 33 points.

After Toronto built up their biggest lead of the game at 72-52 with just under seven minutes left in the third, the Heat went on a 15-6 run to get the margin down to 11 in the final minute of the quarter.

Throughout the fourth quarter, Miami was unable to break through that double-digit barrier until Bosh’s layup with 4:07 left made it 88-79 in favor of the Raptors. However, Toronto answered with a three in their next trip down the court and that served as the start of a 13-2 run to close out the game.

Wade commented about the contrast in the differing fortunes of the two teams, but offered hope:

“We’re the total opposite of them right now,” said Wade. “It’s hard to win in this league, full lineup or not. There’s always a light at the end of the tunnel, we just have to find it.”

Miami will next be in action on Monday night, when they stay on the road to face the Chicago Bulls in a game that will tip off just after 8 p.m. ET.
[xyz-ihs snippet=”Responsive-Ad”]