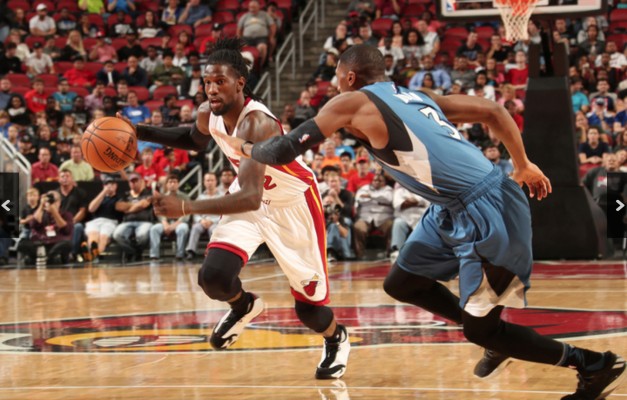 The Heat used their fifth different lineup this preseason in as many games to rest key players like Goran Dragic, Hassan Whiteside, Udonis Haslem, and Tyler Johnson. The one constant in all of team’s preseason starting lineups has been Justise Winslow, who played a limited role on Saturday night and finished with five points in seven minutes.

“If it weren’t a back-to-back, our guys (Whiteside and Dragic) would have played,” Erik Spoelstra said on his decision to rest key players.

The Heat opened the game with an offense that was centered around crisp passing, which allowed them to explode from behind the arc. They had 10 threes at the half and ended the night shooting 13-of-32 from 3-point land.

Most of the those threes came from reserve guards Wayne Ellington and Rodney McGruder, who dropped four and five 3-pointers respectively on the evening. McGruder got a chance to play long stretches for the first time this season and contributed 15 points, three rebounds, and three assists. Meanwhile, Ellington found his shooting groove again after a poor performance against San Antonio on Friday night.

“I told him he better get off 10 (shots) tonight,” said Spoelstra in regards to Ellington.

The 28-year-old ended the game with 11 points on 4-of-12 shooting and added three steals.

“That’s not easy to do in the flow of the game but that’s something I really got to focus on,” Ellington said after the game in response to Spoelstra’s comments. “He (Spoelstra) wants me to be chasing and moving and to find the open spots so the ball can find me.

At the half, Miami had scored 58 points and led by seven, however, the Timberwolves stormed back and took the lead back from the Heat with the help of a 12-2 run to start the third period. As a result of the offense going ice cold at the beginning of the third quarter, the Heat struggled to produce points and were outscored 32-18 at the end of three.

The Timberwolves were led by their star duo of Andrew Wiggins and Karl-Anthony Towns on the evening. Wiggins had 23 points on 9-of-16 shooting while Towns posted a double-double with 16 points and 14 rebounds.

Towns made life extremely difficult for Heat center Willie Reed, who got his first start in place of Whiteside. Reed was not an effective scorer but showed his athletic ability on the defensive end with seven points, 13 rebounds, and one block.

Even though the Heat made a run in the fourth quarter to cut the Timberwolves’ lead to just five with about three minutes to go, they were unable to make to make crucial shots at the end of the game to close the gap any further.

Ultimately, it seemed like Spoelstra wanted to use this game to see the young, unproven talents at the end of the bench compete for spots on the final roster. Players like Keith Benson (14 points and seven rebounds) and Briante Weber (eight points, six assists, four steals) seized the opportunity in the second half and made strong arguments to make the team’s final roster.

The Heat will travel back home to face off against Orlando Magic for their sixth preseason game on Tuesday. Tipoff is scheduled for 7:30 pm ET and will be broadcasted live on Fox Sports Sun.
[xyz-ihs snippet=”Responsive-ImagenText”]