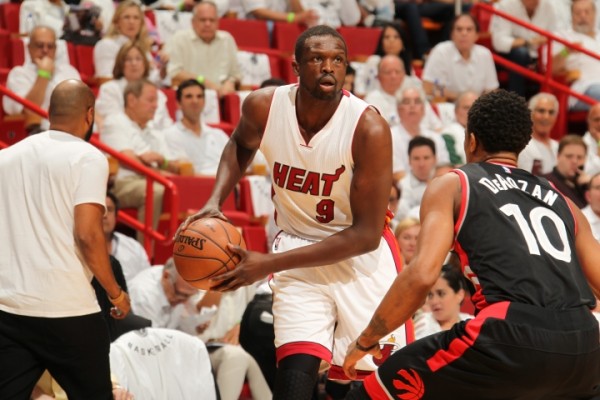 Luol Deng’s wrist injury from Thursday night was ruled a bruise. There are no fractures in the wrist and he has officially been listed as questionable for Friday night’s Game 6. Despite the listing, it is expected that Deng will play on Friday as the Heat stave off elimination versus the Toronto Raptors:

Yahoo! reports Luol Deng has a severe contusion in his L wrist with no fracture. That likely means he'll play Game 6.

That was the good news—now comes the bad news.

Hassan Whiteside, who missed Game 5 with a knee injury, is expected to be out for the second consecutive contest.

The Heat are struggling in the absence of their 7-foot center as Miami is severely thin when it comes to their depth at the big man positions. Towards the end of their 99-91 loss to Toronto on Wednesday night, the Heat had a lineup of Joe Johnson, Justise Winslow, Josh Richardson, Dwyane Wade and Goran Dragic on the court. For those that aren’t aware, Johnson is the tallest one of that group at just 6-foot-7.

With the Heat trailing 3-2 in their series, expect Deng to play major minutes at power forward in Game 6 despite his wrist injury.
[xyz-ihs snippet=”Responsive-Ad”]