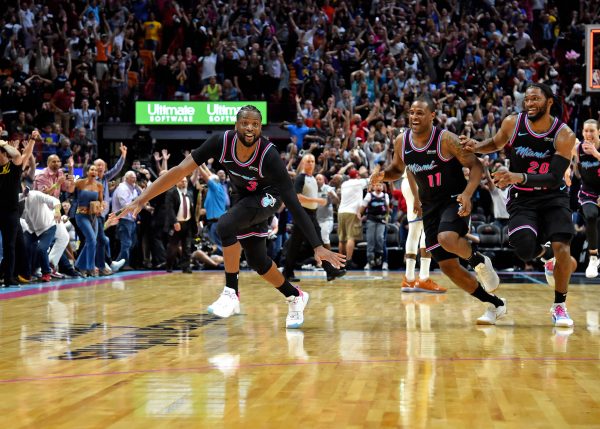 The final season of Dwyane Wade’s NBA career will soon come to an end, with the veteran rightfully receiving plenty of accolades.

In the opinion of Miami Heat teammate Justise Winslow, Wade’s impact has offered inspiration for both Winslow and the team as they battle for a playoff berth.

Winslow has made an effort to absorb as much basketball knowledge as he can from Wade. Yet the future Hall of Famer’s ability to manage his hectic final year has also gotten Winslow’s attention:

“Just the joy he’s bringing to our team and just the positivity, even when we’re going through tough times, still being able to go out and see all the ‘Last Dance’ supporters and fans. It kind of gave us some energy and gave us positivity to push through that tough stretch we were going through.

“It’s motivated me to try to get to that level, where fans support me like that — showing up to the hotel at 3 a.m. just to see him and hopefully get an autograph. This whole thing has been an inspiration and motivation for me. Just to see how he’s been carrying himself. He’s a basketball icon.”

Wade returned to the Heat 13 months ago, with Winslow citing that fact as a reason for his own improved play:

“When he got back last year, you saw the increase in my numbers. Just having him around has meant a great deal for me. I got to figure out this [expletive] next year (when he’s retired). But for right now, I’m in a good place.”

That good place currently has Winslow delivering career-best numbers in multiple categories. He’s connecting on field goals at a 43.1 percent rate while his per-game numbers in points (12.5), rebounds (5.5) and assists (4.3), have put an end to concerns about his development.

The fact that both Winslow and Wade share an aggressive on-court mindset is one reason that the two work so well together, according to Winslow:

“I think for him just to have someone that he sees with the same type of passion and heart and intensity that I play with, that he played with at a young age, as well. I think he sees a little bit of that in myself, so for me it’s just about trying to pick up everything on the court, off the court. How he carries himself and different reads in the pick and rolls. It’s been a great thing for me.”

Wade has previously indicated that Winslow can take over his role as team leader once the Heat legend’s career officially comes to an end:

For now, Winslow and his teammates are trying to help extend Wade’s final season.

The team is currently situated in the eighth and final playoff spot in the Eastern Conference with a 31-35 record, but two other teams are right on its heels. The Heat will look to gain some separation when they host the Detroit Pistons on Wednesday night.
[xyz-ihs snippet=”HN-300×250-TextnImage”]