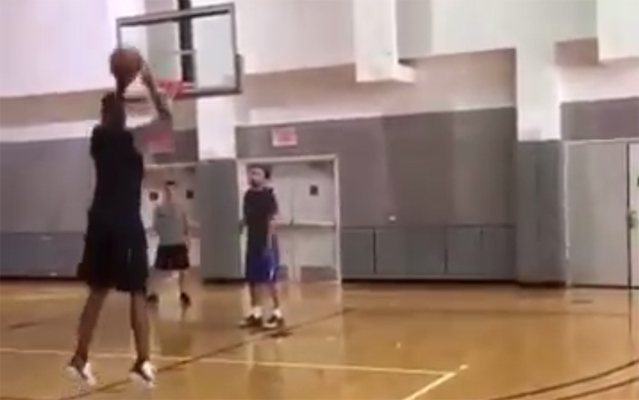 Chris Bosh is back on the court, Heat Nation.

The 6’11” power forward recently posted a video on Snapchat of a workout showing him on the court running drills and shooting mid-range jumpers.

We still do not have an official statement from the team on Bosh’s medical status. The last known report, from Barry Jackson of the Miami Herald, had conversations continuing about the potential use of blood thinners during the season. There is no indication of whether or not the Miami Heat are comfortable with this approach (they were not in the spring) and if they will clear their star big man.

In the video, Bosh says,”Everybody is always asking me am I hooping? Yes, I’m hooping. Absolutely. I’m a hooper.”

Bosh’s wife, Adrienne, also posted a similar clip on Instagram pointing out that her husband has been working hard for a month.

"Everybody keeps asking if I'm hooping. Yes, I'm hooping. I'm a hooper." – @ChrisBosh I've been watching my husband for over a month working day in and day out and happy to see him giving a glimpse of that hard work to the world on his Snapchat (Follow MrChrisBosh) ??? He is a consistent inspiration for me! A lot of people "say the right things" but very few follow through in their "actions". Looking forward to seeing his "actions" on a court this season? #TeamBosh #IGotItOnAString #ImAHooper #ActionsSpeakLouderThanWords

We will have to wait, most likely until training camp, to get a clear answer on Bosh’s status but it’s great to see him back on the court.
[xyz-ihs snippet=”Responsive-ImagenText”]