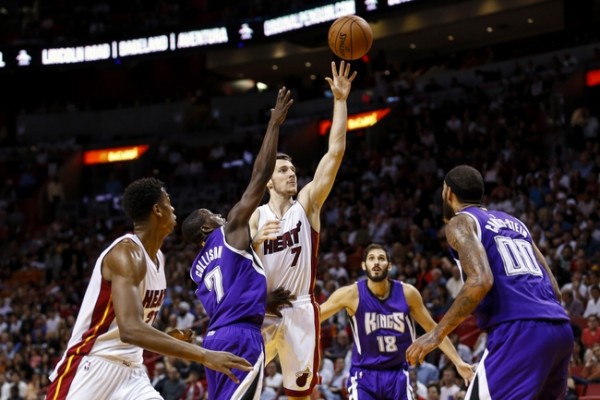 According to Michael Scotto of Basketballinsiders.com, the Heat have discussed a trade that would send Goran Dragic to the Sacramento Kings in exchange for Rudy Gay and Darren Collison.

Per Scotto: “The Sacramento Kings and Miami Heat have discussed a trade of Rudy Gay and Darren Collison for Goran Dragic, league sources told Basketball Insiders.”

Both Gay and Collison will be unrestricted free agents after the season is over, which means taking both players on while losing Dragic would allow the Heat to have even more cap space in the summer.

Per Scotto: “Gay can become an unrestricted free agent after this season since he has a $14,263,566 player option for next season. With that in mind, sources indicated that the Kings are ideally looking for a starting-caliber point guard in any trade proposal involving Gay.”

A dramatic shakeup is inevitable in Sacramento.

Putting a hungry point guard like Dragic on the Kings could give them the turnaround they need. Dragic is a skilled, crafty playmaker who can knock down the jumper and play hard defense. In addition, the former All-NBA Third Team guard is fresh off a competitive playoff run and has expressed a desire to be in the postseason battling for a championship. The Kings need someone as desperate as Dragic to run their offense and lead their guys.

Although the Heat are trying to embrace Dragic’s vision, they’re more in the middle of a heavy rebuilding project. Still, this deal would allow the Heat to gain financial flexibility this upcoming summer while staying competitive this season.

Dragic is guaranteed $51 million over the next three seasons and has a $19.2 million player option for the 2019-20 season. The huge sum of money the Heat are scheduled to pay him could be used on plenty of upcoming, budding free agents like Blake Griffin, Stephen Curry, Gordon Hayward and much more in the years to come.

Both teams may have pressed the pause button on this trade for now but keep your eye on it throughout the season.
[xyz-ihs snippet=”Responsive-ImagenText”]