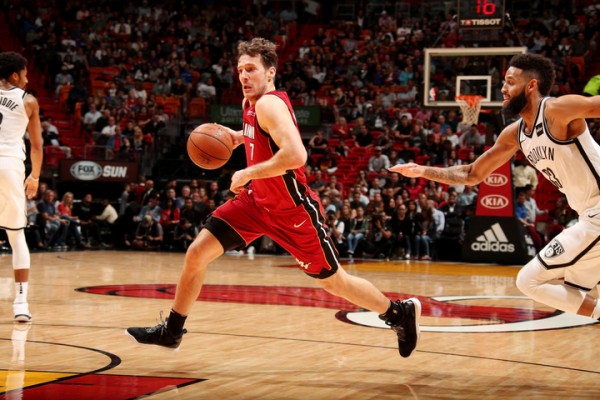 (Miami, FL) – The Miami Heat have enjoyed many more wins than losses in the last few weeks. They have won seven of their last 10 games and seemed to be on the right track to return to the playoff conversation in the Eastern Conference.

That conversation came to a screeching halt on Friday night, however, when the Brooklyn Nets came to town and and proceeded to dismantle the home team as the Heat went on to lose in a morale-killing blowout, 111-87.

“Well, obviously it’s an extremely challenging team to figure out, but before we talk about us, first you just have to give credit where credit is due,” Heat head coach Erik Spoelstra said following the defeat. “Brooklyn played very hard. Competed on a different level than us. They really deserved to win this game.”

The game began promising enough for Miami as it jumped ahead to an eight-point lead with just under 10 minutes left in the first quarter. It was at that point in the game that the Nets began clawing back. With 2:18 left in the quarter, the Nets secured their first lead of the night at, 20-18. They would never trail in the game again.

The decisive scoring run began as soon as the second quarter did as Brooklyn scored the first nine points of the quarter. Caris LeVert, who finished the contest with 12 points, 11 assists, and five rebounds off the bench, and Rondae Hollis-Jefferson, who finished with 18 points, led their team to a scorching second quarter in which the Nets outscored the Heat, 35-19, on their way to a 59-39 lead heading into halftime.

Of course, there was a whole second half for the Heat to attempt a comeback, but for everyone watching, it was clear that the game was effectively over. By the end of the third period, the Heat’s deficit had ballooned to 35 points. While they managed to bring the game back to a slightly less embarrassing final score, this was certainly a game to forget for the Miami faithful.

It was evident by the final score that many on the Heat roster simply did not show up to compete in Friday night’s game, but that does not mean that there weren’t some bright spots. Josh Richardson once again showed off his growing offensive repertoire on his way to 19-point performance. Perhaps even more promising was Hassan Whiteside‘s performance. The talented big man finished with 17 points, eight rebounds, and two steals, despite playing just 20 minutes in his second game back from injury.

Miami’s shooters failed to make much of an impact on the game at all as Tyler Johnson finished with 11 points on 4-of-15 shooting and Wayne Ellington added just seven points on a dismal 0-of-6 shooting from beyond the arc.

“Poor effort on all of our part. I guess the good thing is that we play tomorrow and we can still get to two games above .500,” Johnson said from the team’s locker room. “It seemed like they just outplayed us. They just wanted this game more than we did, and like you said, that’s rare to say that about a group like this, but they just wanted the game more.”

After a loss like this, it would make sense for the Heat to look to put this game behind them as quickly as possible.  They’ll have to do that in the next 24 hours as they travel to Orlando to face off against the Magic on the second leg of a back-to-back.
[xyz-ihs snippet=”HN-300×250-TextnImage”]