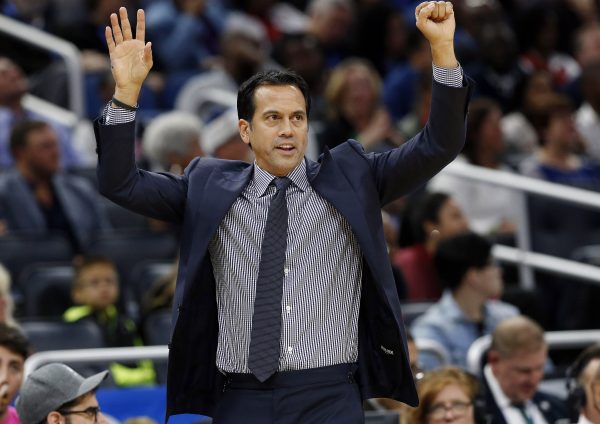 The current status of Miami Heat head coach Erik Spoelstra isn’t a cause for concern for the team, given the close bond between Spoelstra and team president Pat Riley.

However, one report suggests that when Riley does retire from his role, the Heat could end up seeing Spoelstra get lured away by another team if they don’t offer him the position.

Brian Windhorst of ESPN looked at how teams within the NBA have had coaches who also have served as team president. While pointing out how the approach has largely been unsuccessful, Windhorst did note the dilemma the Heat could face when the 73-year-old Riley does retire:

“In the meantime, at some point, Erik Spoelstra is a likely candidate to get some or all of Pat Riley’s powers as Miami Heat president when Riley decides to retire. If for some reason he doesn’t, some team will probably be interested in hiring him for both jobs elsewhere to get him away from the Heat. So it goes in the NBA.”

Spoelstra has worked his way up through the Heat organization, having worked behind the scenes before being promoted to an assistant coach under Riley in 1997. He served in that role for 11 seasons, which included most of three seasons under former Heat coach Stan Van Gundy, who was fired and replaced by Riley during the 2005-06 campaign.

When Riley gave up the coaching reins following the 2007-08 season, Spoelstra was named to succeed him on Apr. 28, 2008. Currently in his 11th season, Spoelstra has compiled a regular season record of 503-340. During that time, he led the Heat to four consecutive trips to the NBA Finals from 2011 to 2014, with the Heat capturing league championships in both 2012 and 2013.

Despite his long tenure with the Heat, Spoelstra is just 48 years old. Given his track record, he could be seen as a quality pickup by a team that’s willing to offer him presidential authority. While there’s no indication that the Heat is looking to hire someone else down the road or that Spoelstra even wants the job, the team would be advised not to take the situation for granted.
[xyz-ihs snippet=”HN-300×250-TextnImage”]