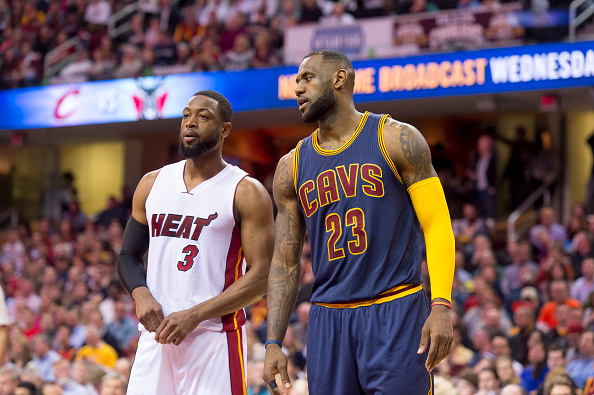 This might be a Miami Heat fan’s worst nightmare. Could Dwyane Wade actually leave Miami to go play with LeBron James in Cleveland?

Before we get ahead of ourselves, let’s take a look at what happened while the fireworks were going off throughout America.

First, Wade is rumored to have returned from his vacation in Ibiza, Spain sometime in the last day. He was there with this his wife, Gabrielle Union, and was also joined for a short time by James and the Los Angeles Clippers’ Chris Paul.

Now, let’s flashback to the summer of 2014 when James was contemplating leaving the Heat. At the time, Cavaliers owner Dan Gilbert ha a secret meeting down to Miami to sit down with the four-time MVP and convince him that he should come back to Cleveland. The story got reported by Joe Lull, a Cleveland media member, who tweeted the tracker for the flight Gilbert was on. The rest of the national media took it from there.

About four hours ago, Lull tweeted out another tracking link. This jet flew from Ft. Lauderdale, FL to Cleveland, OH.

This seems strange at first but nothing to worry about. Until we saw this tweet from Luxury Group Jets:

We looked through the luxury airliner’s fleet and there is a plane that matches the tracking information posted earlier.

And it actually looks like Wade, James, and Cavaliers owner Dan Gilbert might have used this private jet to fly from Florida to Ohio. The reason for this flight is still unknown and there are no confirmed media reports that Wade is meeting with Gilbert and James. But there is speculation galore throughout the internet.

After all the shenanigans that Pat Riley has pulled this offseason, from lowballing Wade, to lowering him on the totem pole of importance, it might all be adding up. By his own Snapchat, Wade was in Spain this morning and if he did travel all the way to Cleveland, there might be something brewing.

The Heat did offer Wade a two-year, $20 million deal shortly after Durant announced his intention to join the Golden State Warriors. But according to many media members, Wade is still miffed about being treated so poorly by the Heat front office.

@TheRealJay15 he's unhappy. Things are strained between him and the Heat. He wanted to be prioritized and he wanted 3 years. Now we wait.

Like Ethan Skolnick says, we will just have to wait and see. Heat fans won’t be resting easy until Wade inks a contract to stay in Miami. Especially not if James and Gilbert are going to be flying around in private jets waiting to see if Wade will join them onboard.
[xyz-ihs snippet=”Responsive-ImagenText”]