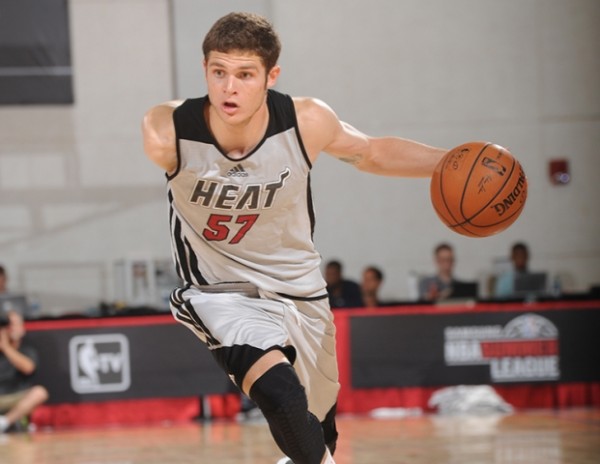 Mario Chalmers has been on the trade block for the last few months, but the Miami Heat may hold off on trading the veteran point guard.

According to Barry Jackson of The Miami Herald, the Heat want to see how young guards Tyler Johnson and Josh Richardson look in training camp before making a decision in regards to trading Chalmers. It is well-known that the Heat are trying to shed salary in an attempt to minimize their luxury tax penalties at the end of the upcoming season.

However, while the team is set with Goran Dragic at starting point guard, they don’t know what they have in terms of depth behind Dragic. Jackson commented on this topic in his weekly “Sunday Buzz” column:

“And with Tyler Johnson also cleared to return from his broken jaw sustained in Summer League (he has been working out in Delray Beach), the Heat is back to full strength a month before training camp.

“The Heat, incidentally, wants to take a long look at Johnson and Josh Richardson in training camp before deciding whether to make a renewed attempt to trade Chalmers.”

Last season, Johnson suited up at backup shooting guard after being called from the D-League in January. While he looked solid as a bit player in the rotation, his minutes at point guard were extremely limited. He is expected to make a full transition to point guard in training camp after playing at the position during Summer League.

Richardson is a rookie second-round draft pick who played small forward, shooting guard and point guard in college at the University of Tennessee. While he looked impressive over the summer, the Heat will find out how NBA-ready he really is leading into the regular season.

As much as Heat Nation may want to see Chalmers go, the most logical decision is to keep the veteran point guard on the roster until Johnson or Richardson prove they’re capable of handling backup point guard duties.
[xyz-ihs snippet=”Responsive-Ad”]