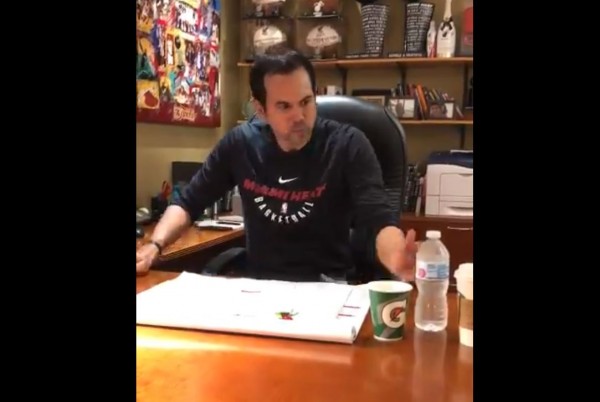 Winners of their last six straight games, the Miami Heat (24-17) are surging at the halfway point of the NBA season thanks to some superior leading by Heat head coach Erik Spoelstra.

The coach isn’t just making a difference on the court, he’s making one off of it as well. On Friday, Spoelstra took part in the #ALSPepperChallenge, a campaign aimed to raise money for ALS research.

The spicy challenge was orchestrated by NBA analytical guru Tom Haberstroh, who covered the Heat during his time with ESPN. Haberstroh’s mother was diagnosed with the neurodegenerative disease just before the holidays, driving the family to find a cure for the terrible disease. Similar to the ALS Ice Bucket Challenge from 2014, the challenge also calls participants to nominate three friends, encourage them to donate to the cause and share the video.

Spoelstra, who thoughtfully encouraged the campaign and urged others to donate, nominated former Heat assistant coach David Fizdale, Jason Jackson and Ira Winderman. Despite losing multiple players to injuries early in the season, Spoelstra has steered the Heat to the fourth seed in the Eastern Conference, just two games behind the Cleveland Cavaliers.

The superb job by Spoelstra 41 games into the season has earned him consideration for Coach of the Year honors. The 47-year-old also surpassed NBA legend Pat Riley as the franchise’s all-time wins leader in December. If Spoelstra continues to guide the Heat upward for the rest of the year, there’s no doubt that he’ll be in strong discussion for the exemplary coaching award.
[xyz-ihs snippet=”HN-300×250-TextnImage”]