Pat Riley: Re-Signing Hassan Whiteside Is Our ‘No. 1 Priority, Period’ 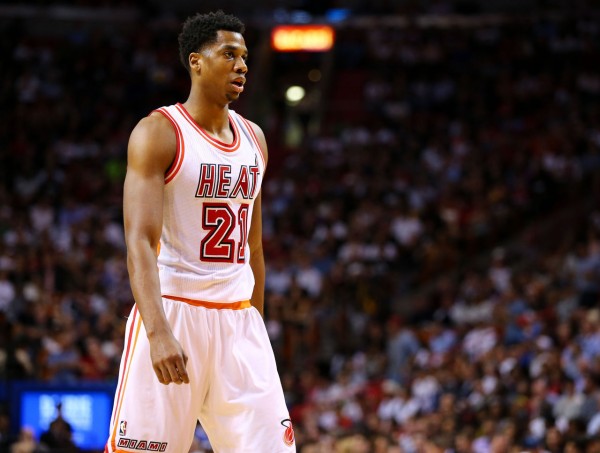 Some of the uncertainties that the Miami Heat face this offseason finds them trying to determine who will still be on the roster a few months from now. However, team president Pat Riley indicated at his Wednesday press conference that re-signing center Hassan Whiteside was the franchise’s top priority.

“He’s our number-one priority, a game changer,” he said. “I don’t think he’s even reached his ceiling.”

Riley spoke about dealing with Whiteside fairly when he becomes a free agent, but also emphasized what he can give the team.

“I want to build a team that can win and he’s got to be part of it. You get to the other part of negotiations and find out how much he wants to win, too,” said Riley. “That doesn’t mean he has to take a haircut. He’s got to carry a load every night that allows you to be a contender. I think he can do that.”

Despite the serious nature of potentially losing Whiteside, Riley found time to joke about the situation that begins on July 1.

“I met with him and asked if he likes chocolate in his gift basket or go to Parrot Jungle or sightseeing tour of Miami,” Riley said. “He will be right there at 12:01 for us.”

Without mentioning him by name (for obvious reasons), Riley also spoke about the team’s ability to lure a major free agent like Kevin Durant away and the roster as a whole.

According to Riley, another key priority for the Heat this offseason is to sign Heat Lifer and veteran guard Dwyane Wade.

“We’ll sit down and talk about that with Dwyane,” Riley said. “He wants to win as much as he wants to do anything. Compensation, to a player, is not just a way to get paid and live your life. Compensation to a player is about recognition and respect. We know where he belongs. He’s a lifer. What he’s done in this city over the last 13 years is irreplaceable. We want to do the right thing, no doubt.”

The great unknown still exists regarding the status of forward Chris Bosh, with Riley trying to balance the team’s needs with sensitivity toward Bosh.

“It definitely has hurt the team, but more so than anybody, he’s the one who’s suffering through it.” Riley said, “Up to the All-Star break, he was our best player.”

Despite the frustration of not being able to guarantee Bosh’s return, Riley didn’t express any real surprise about it.

“We all knew what the treatment was going to be this year,” Riley said. “When we got to this point this year, it’s eyes wide open.”