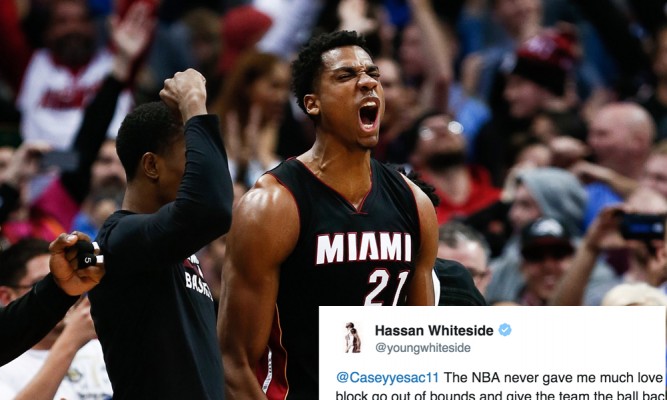 It looks like Hassan Whiteside still has to prove his shot-blocking abilities to the rest of the NBA.

Even though the star center led the league with 3.7 blocks per game last year, he only cracked the NBA’s “Top 50 Blocks of 2016″ list once.

His block against the Charlotte Hornets’ Marvin Williams made the list at No. 7.

We think many of the blocks in this video could have made the list.

Whiteside had the perfect response to his snubbing on Twitter.

He acknowledged that his goal is to keep the ball in play and not simply give the possession back to his opponent, like many of the blocks on the list. That’s something he and owner Mickey Arison seem to agree on.

Whiteside has been working on other aspects of his game this summer, but the one thing you can count on is his dominant presence blocking shots near the rim. Hopefully, he can make the case that his blocks are just as impressive and effective by continuing his rise to stardom next season.
[xyz-ihs snippet=”Responsive-ImagenText”]

Featuredhassan whitesidemiami heatMickey ArisonNBANews Ticker
← Previous Story Erik Spoelstra: Hassan Whiteside Has the Potential to Be One of the Best Players in This League
Next Story → Chandler Parsons Says He’d Be Willing to Play for Miami Heat