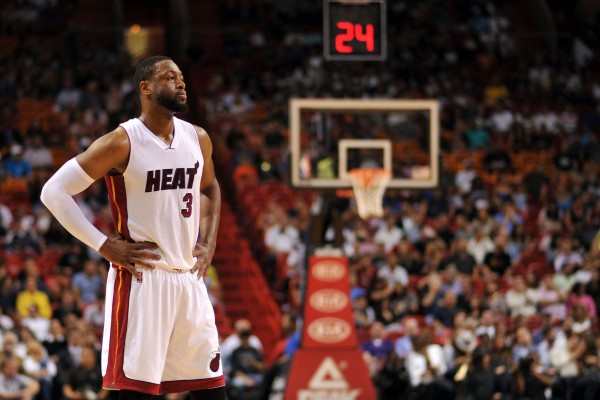 When Dwyane Wade came off the bench in Friday night’s victory over the Dallas Mavericks, it marked just the 10th time in his career he had done such a thing.

Not only did the Miami Heat dominate one of the top teams in the Western Conference with Wade as a bench player, the former Finals MVP posted impressive stats in just 19 minutes of playing time—10 points on 5-of-6 shooting with seven assists.

While it is a one-game sample size, it may have provided a glimpse into the near future in regards to how the Heat may utilize Wade. With the 13-year veteran due to turn 34 years old on January 17th, it may be the best way to preserve Wade as he enters the twilight years of his career.

Ira Winderman of The Sun Sentinel states that there’s a good chance the Heat approach Wade with the idea of him playing off of the bench in the offseason:

“The Manu Ginobli plan has been debated in this space for months. But the approach only works if the player is at peace with the idea. From every indication from Dwyane, he does not see himself at that stage of his career yet, especially in a contract year. I do believe, however, that the notion will be broached by the Heat at the bargaining table next summer, especially with the emergence of Tyler Johnson and Justise Winslow, and with the possibility of Gerald Green sticking around for another season. But it is an approach that likely will be addressed in the offseason, when a specific plan can be put in place.”

As Winderman notes, it all depends on what Wade is willing to do as a player. While it may be tough for the 11-time All-Star to accept a role off of the bench, it’s not implausible—this is a guy who has sacrificed millions in the past and gave up his role as the primary offensive weapon during the “Big Three” era so the Heat could win two more championships as a franchise.

However, this only becomes an option if Miami has the right pieces in place for Wade.

Though it may not happen now or even next season, the idea of the 33-year-old franchise player embracing a Manu Ginobli-type role with the Heat in the future is what may end up extending Wade’s career.
[xyz-ihs snippet=”Responsive-Ad”]