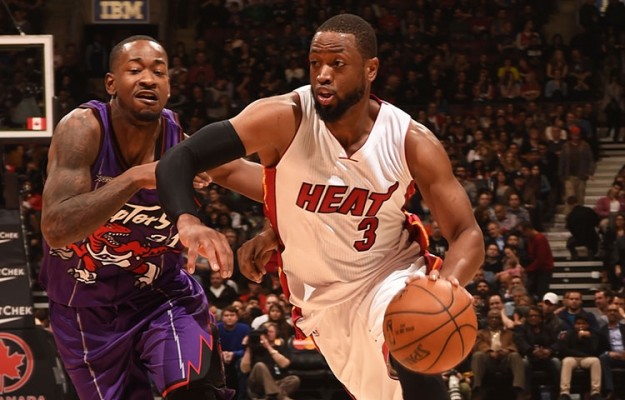 (Toronto, ON) – With a golden opportunity at their hands to knock off a struggling team, the Miami Heat (29-36) fell to the Toronto Raptors (39-26) by a score of 102-92 on Friday night at Air Canada Centre. The victory was the first over Miami in more than five years, which snapped a 16-game losing streak in the series.

In a game they desperately needed to win on the road, the Heat simply laid an egg and trailed by as many as 21 points on separate occasions in the fourth quarter. Despite only having won nine of their last 10 games (four straight losses) and missing their starting center Jonas Valanciunas, Toronto completely outplayed Miami throughout most of the contest.

Dwyane Wade had yet another gutsy performance on the night, as the 11-time NBA All-Star led all scorers with 25 points (a highly-efficient nine of 13 from the field) to go along with four assists. The three-time NBA champion continues to add to his superb scoring streak, as Wade has scored at least 25 points in five consecutive games.

The Heat also had good production out of their starting point guard, as Goran Dragic racked up 18 points, five assists and two steals. Michael Beasley added 11 points and nine rebounds off the bench, while Henry Walker contributed eight points and four steals on the evening.

Hassan Whiteside, who returned after a one-game suspension for his incident with Boston Celtics center Kelly Olynyk on March 9th, recorded nine points, 12 rebounds and three blocks in only 24 minutes. The center out of Marshall University claimed he was a lot more coolheaded tonight, which is a good sign following his two ejections in a span of seven days.

“They was trying to do stuff to me, and Kyle Lowry knocked me into the first row, but I didn’t say nothing or do nothing,” said Whiteside after the loss.

With no foul called on Lowry, there is really no blaming Whiteside for being irked about the play.

The loss puts Miami in an even tougher situation than before, as the Charlotte Hornets (29-35) leapfrogged Miami to take the eighth seed in the Eastern Conference playoff race. The seventh seeded Indiana Pacers (30-34) have won seven straight games, while the Boston Celtics (28-36) are winners of three straight and seven of their last 10.

Things do not get any easier for the Heat whatsoever, as they will host the red-hot Cleveland Cavaliers (42-25) on Monday night at American Airlines Arena. The game is scheduled to tip off shortly after 8:00 pm ET and will be broadcast nationally on ESPN.
[xyz-ihs snippet=”Responsive-ImagenText”]