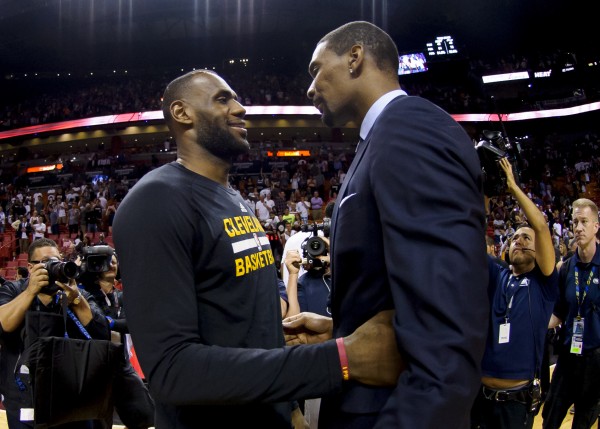 Everyone has been giving their two cents on the latest news surrounding Chris Bosh, since Miami Heat president Pat Riley said the team wasn’t “working toward his return” due to recurring blood-clot issues.

The comments have continued with superstar and former teammate LeBron James weighing in. The four-time MVP communicated his support for Bosh and the importance of safety for the 6’11” power forward. Per Ira Winderman of the Sun Sentinel, here are some of James’ words.

“I stand behind my brother Chris,” James said. “The most important thing is his health. Whatever decision he wants to do, I’m all for it. I support him in every way, shape and facet. It’s a difficult situation for him. I was pretty surprised to hear that the team was just done with him, for them to come out and say that. But it’s not like I’ve been there to know exactly what’s gone on. I’ve only seen it from the exterior. I wish the best for him, he has my support.”

One thing that stands out is how astonished James was that the Heat declared Bosh’s career most likely over. The big man has been attempting to make a comeback for a few months, posting videos of himself working out and doing basketball drills as well as releasing motivated talks to fans.

However, a failed physical has injected plenty of doubt that the veteran will ever return to the NBA. Even if Bosh is released from the Heat, it’s unlikely other teams will take a chance on the 32-year-old.
[xyz-ihs snippet=”Responsive-ImagenText”]