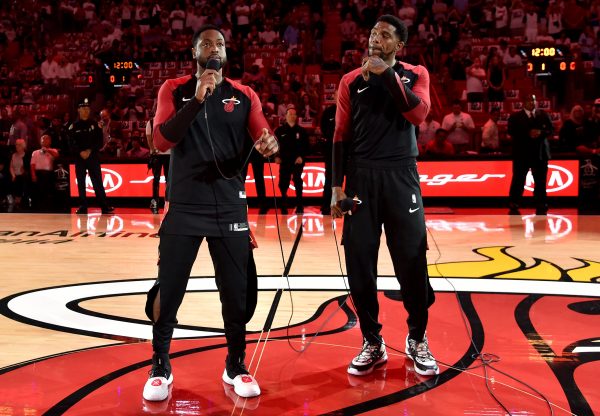 The Miami Heat will soon say goodbye to two of the organization’s biggest legends as both Udonis Haslem and Dwyane Wade plan to retire at the end of the 2018-19 season. The one person who may miss them most is Heat head coach Erik Spoelstra.

Now that the season has surpassed its halfway point, the end of Wade’s and Haslem’s career is in sight. For Spoelstra, it will mark the end of something truly special.

Spo on coaching Dwyane and UD: “They’ve meant everything to me.”

While Wade is by far the more celebrated player of the two league wide, Haslem is just as beloved within the organization and around South Florida. Together, Wade and Haslem have helped bring three NBA championships to Miami. Spoelstra served as Miami’s head coach for two of them.

For Spoelstra, there is little doubt that he knows how much Wade’s and Haslem’s contributions on and off the court have added to his own success.

Fans can be sure that both Wade’s No. 3 jersey and Haslem’s No. 40 jersey will one day hang from the rafters in American Airlines Arena. Until then, it’s clear that their head coach will savor every moment he has left of having both players on his team.
[xyz-ihs snippet=”HN-300×250-TextnImage”]