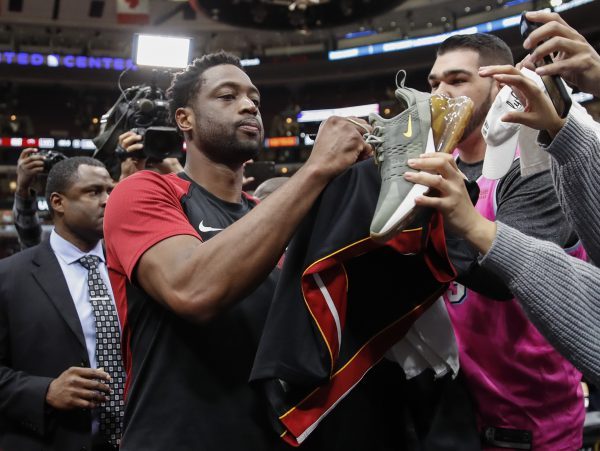 Miami Heat legend Dwyane Wade enjoyed an incredible past week of tributes and honors which included a final farewell to his hometown fans in Chicago, and seeing his jersey retired by his Alma mater Marquette University, but there’s still one moment that will surpass them all: his final game in Miami.

Wade spoke about the highs of his farewell tour after Marquette defeated Providence College on Sunday.

“Having my last Chicago game, and then to follow it with Dwyane Wade Day at my college, for ‘One Last Dance,’ besides my last game in Miami this is the peak of it,” Wade said. “And it’s been great. It’s been good to go into Chicago and get that win, and have that love there, have that moment there, and then the next day to come here and be able to have all this … it gets no better.”

There’s no doubt that those two experiences were quite special for Wade and his family, but there is similarly no doubt that they will pale in comparison to his final performance in front of what is sure to be a packed American Airlines Arena.

So far this season, Wade has not played like a player who is on his way out of the league. He is currently averaging 14.0 points, 4.1 assists, and 3.7 rebounds per game. In fact, his consistent production has led some of his colleagues to ask why he plans to retire at the end of this season. Nonetheless, Wade has remained steadfast in his determination to put his NBA career behind him at season’s end.

Knowing that, the second half of the 2018-19 season is sure to be an emotional one for Wade and the players and fans who love him.

Wade’s final home game in Miami comes in an April 9 matchup against the Philadelphia 76ers. Considering the fact that the Heat currently sit at first place in the Southeast Division, however, Wade’s ultimate goodbye to his most adoring fans could very likely come in a postseason matchup.
[xyz-ihs snippet=”HN-300×250-TextnImage”]