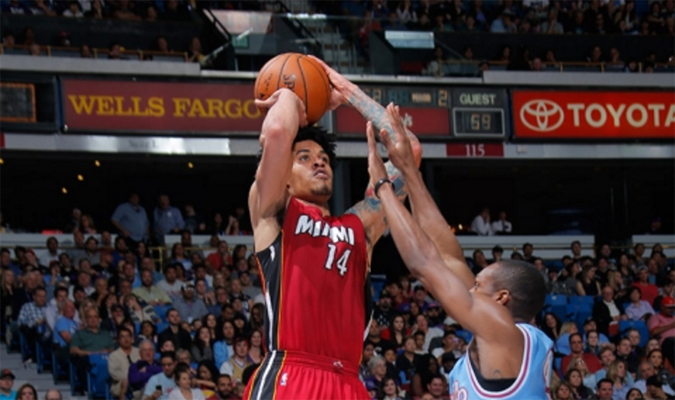 (Sacramento, CA) — With Dwyane Wade (neck, back) out for the game, Gerald Green knew he had one more chance to prove himself after falling out of the rotation. Following weeks of questionable play, Green showed all the reasons and more by offensively obliterating the Sacramento Kings. But it was the Miami Heat who showed the questionable, yet strong-willed, play by losing grip of a massive lead and letting the Kings get back into the game before securing a 112-106 victory at Sleep Train Arena.

After coming off their worst loss of the season against the Los Angeles Lakers Wednesday, the Heat wanted no repeat of the same result vs. the shorthanded Kings. Green foreshadowed his big night with 15 big points in the first quarter. Seth Curry scored 10 points in the first few minutes of the game but got little help elsewhere. A 23-4 Heat run fueled by complete teamwork and strong shooting saw Miami go up 39-24 at the end of one.

In the second quarter, the Heat would build on their lead as the Kings began to flounder. Unable to score for over four minutes, the Kings fell behind by as much as 24 points. Green, who continued to light it up, had 20 points on 4-of-4 three-point shooting at halftime as the Heat led 66-48, the team’s highest point total in the first half this season.

Riding by their persistent shooter, the Heat relied on Green in the third quarter as the hot shooter added 10 more points. But a 12-2 run by the Kings gave the home team some momentum as the Heat closed the quarter up 92-76.

Opening the fourth on 15-3 run, the Kings quickly made their way back into the game behind Darren Collison. The 6-foot point guard scored 11 points in five minutes to rally the Kings while the Heat fell out of their groove.

Four straight points by Curry would bring the Kings to within one point and again later as Kosta Koufos got a hook shot to fall. But with 1:15 left, the Heat’s second closer, Joe Johnson, drained a jump shot to bring the Heat up by three. Following a Collison miss, Luol Deng drilled a huge three-pointer from Goran Dragic, next to the Kings’ bench, to extend the lead to six. The Heat’s starting point guard nailed two free throws at the end of the game to grab the 112-106 nail-biter.

After the close call, Heat head coach Erik Spoelstra spoke of the playoff-like battle down the stretch:

Doing things that are necessary was just what Green, whose been planted on the bench lately, did after leading all scorers with 30 points. The veteran, who grew unfavorable in the lineup after the signing of Johnson and growth of Josh Richardson, stayed ready and put the work in.

Spoelstra expressed his pleasure of the 30-year-old’s burst:

“I love it. He’s done it with great work and purity. Every single night he’s in there working after games, staying ready, staying in shape. He’s the first guy on the floor before practice and last guy to leave”

Not only did Green surpass his previous season-high of 25 points in the third quarter but scored more points tonight than he did in his last eight games combined. The streaky guard will have another chance to prove himself as Wade continues to nurse a sore back and neck Saturday night.

In addition to Green’s 30, Dragic led the team with 18 points and seven assists. Deng chipped in with 17 points and four assists on 3-for-3 three-point shooting while Johnson added 14 points and eight assists. Off the bench, Justise Winslow put up 12 points and five rebounds and Hassan Whiteside grabbed 13 rebounds and blocked three shots.

Collison led the Kings with 26 points off the bench and Curry had 21 points on four three-pointers. Rudy Gay notched a double-double with 20 points and 13 rebounds and former Heat rival Rajon Rondo had five points, 10 assists and five rebounds. Koufos, who took over the suspended DeMarcus Cousins’ minutes, had 12 points and nine boards, including six offensive rebounds, off the bench.

The Heat will conclude their three-game road trip in the Northwest tomorrow as they take on Damian Lillard and the Portland Trail Blazers.
[xyz-ihs snippet=”Responsive-Ad”]