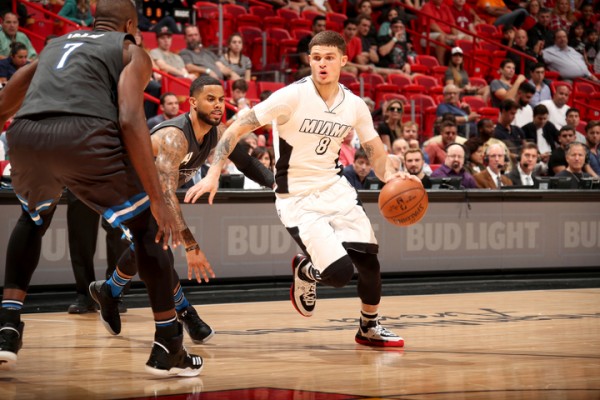 With 48 seconds remaining in regulation, point guard Goran Dragic (19 points, five assists and four rebounds) nailed a three-pointer to give Miami a 108-103 lead.

Unfortunately, the Heat were unable to hold on as Magic power forward Serge Ibaka (20 points on 8-of-15 shooting made from the field and nine boards) sent the game into overtime with his clutch offensive rebound and bank shot in the final second of play.

“It feels great. After two overtimes, both teams battled all the way until the end. To come up on top and win this game means a lot for us,” Magic center Nikola Vucevic said.

For the Heat, monster nights from both star center Hassan Whiteside and guard Tyler Johnson went to waste in a tough loss as the duo combined for 64 of the team’s 130 points.

Whiteside’s double-double matched a career-high in scoring with 32 points, 15 rebounds and five blocked shots in 47 minutes, while Johnson set a new career-high off the bench with 32 points, five rebounds, three assists and three steals in the most points scored by a Miami reserve in franchise history.

In a game that featured 27 different lead changes and a lack of defense between the two teams, the Magic had four players score at least 20 points in the highest-scoring contest in series history between Miami and Orlando.

The Heat were able to knock down 12 of their 30 3-point attempts, but the Magic shot a more efficient 11-of-22 from behind the arc.

“It’s a little bit of everything,” Heat head coach Erik Spoelstra said after the game. “We had opportunities to get some stops. The team really competed.”

Vucevic came off the bench to record a double-double with 26 points and 12 rebounds for the Magic, while guards Evan Fournier and Elfrid Payton had 26 and 22 points respectively.

“It was tough, but we showed a lot of resiliency,” Payton said. “We just continued to fight and play until the end.”

Up next, the Heat will play the final game of their six-game homestand on Thursday night when they host the Los Angeles Lakers (11-20) at American Airlines Arena. The contest, which will tip off shortly after 8:00 p.m. ET, will be broadcast live nationally on TNT.
[xyz-ihs snippet=”Responsive-ImagenText”]