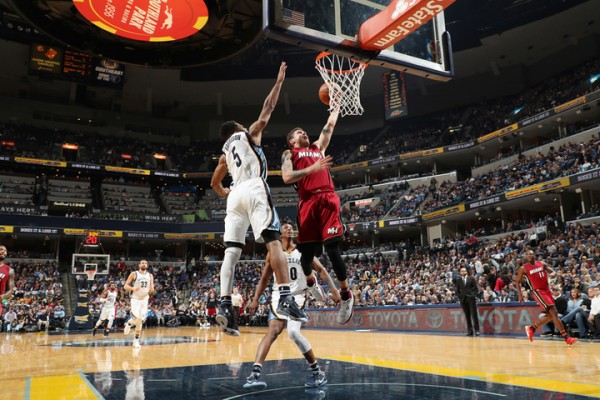 (Memphis, TN) – After it lost its previous two road games, the Miami Heat (5-10) pulled off a stunning upset over the Memphis Grizzlies (10-6) at FedExForum on Friday night as it snapped Memphis’ six-game win streak.

Despite the worst game of the season for Heat rising star center Hassan Whiteside, who managed to score only four points (1-of-6 from the field) to go along with 12 rebounds and two blocks despite foul trouble the entire game, Miami led by as many as 17 points late in the third quarter and never trailed Memphis en route to an improbable road victory.

“It wasn’t anything overly-enlightening,” said Heat head coach Erik Spoelstra after the game. “After a couple of losses, you want to change everything. That’s instinct, and sometimes you can fall prey to that and we just really wanted to get back to the basics.”

The Heat got its spark off the bench from shooting guard Tyler Johnson and power forward James Johnson, who went off for a combined 35 points in one Miami’s most complete wins of the season through 15 contests.

Tyler Johnson had a game-high 22 points and five boards on 8-of-17 shots made from the field, while James Johnson had 13 and six boards. The exclamation point on the game came with 3:03 left in the fourth quarter, when James Johnson placed a perfect pass to Tyler Johnson for an emphatic one-handed slam dunk.

“He’s being aggressive where we need him to be aggressive,” Spoelstra said. “He also is a recipient of secondary actions of when the ball moves. He’s an example of the ball finding energy, but the ball has to move to find that energy.”

For the Grizzlies, who only had two players score in double figures, point guard Mike Conley had 16 points, four rebounds and three assists, while power forward JaMychal Green had 14 points and six rebounds.

Up next, the Heat will get right back at it with the Grizzlies on Saturday night with a rematch at AmericanAirlines Arena. The contest, which will tip off shortly after 8 p.m. on Saturday night, will be broadcast live locally on Fox Sports Sun.
[xyz-ihs snippet=”Responsive-ImagenText”]