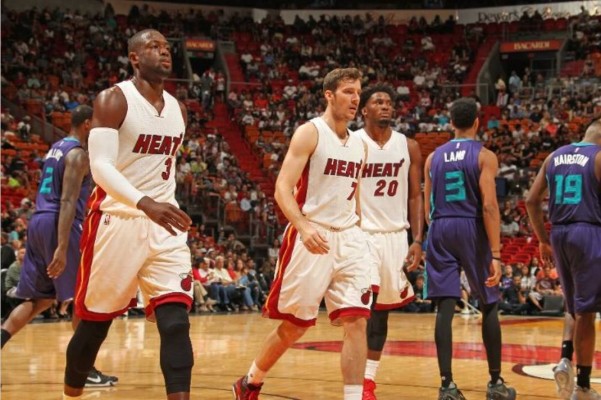 (Miami, FL) — The Miami Heat opened up their 2015-16 preseason campaign on a down note by falling 90-77 to the Charlotte Hornets on Sunday night at American Airlines Arena.

Four members of the Heat finished in double figures for scoring, led by the returning Chris Bosh with 14, who also led the squad with seven rebounds, while Goran Dragic dished out a game-high six assists. Top pick Justise Winslow had an up-and-down evening, displaying effective defense on a number of occasions, but nailing only two of his outside shots and missing three of his eight free throws.

One of the areas for improvement for Miami as a team will be finding a way to improve their long-range shooting after hitting just three of 16 three-point attempts on the night.

Despite the defeat, Heat head coach Erik Spoelstra was philosophical about the learning curve that comes at the start of every season:

“There are some things we can definitely build on. I’m looking forward to getting more practice time and getting the guys more cohesive,” said Spoelstra.

The opening moments had the usual back-and-forth action of a regular NBA game, though the rust of the offseason was evident early as only three points were scored in the first three minutes. The pace soon picked up as Kemba Walker paced Charlotte with eight early points, including a pair of threes to give his team a 10-8 advantage midway through the period.

Charlotte later ran off six unanswered points before Miami was twice able to chop their deficit down to two points. Jeremy Lin’s jumper with just under a minute to play in the quarter gave the Hornets a 26-22 lead after one.

The Hornets twice pushed the lead up to seven in the opening moments of quarter number two, before then twice leading by nine. The Heat were plagued by a pair of dry spells that kept them from adding to their point total for almost a combined seven minutes, missing a total of nine outside shots.

After Cody Zeller’s three made it 45-35 in favor of the Hornets with 2:18 to go before intermission, Miami was able to whittle the lead down to one, on a layup by Winslow with 5.9 seconds left. However, the rookie then fouled Walker, who connected on two of his three free throws with less than a second left to make it 49-46 in favor of Charlotte at the half.

The Heat took a pair of brief leads in the third quarter, the last following a Dwyane Wade fadeaway jumper that made it 55-53 with 6:34 remaining. The Hornets answered with a 16-4 run to make it 69-59 with just under two minutes left in the stanza. Gerald Green’s two baskets got the deficit down to six before the horn sounded.

In the fourth, Miami could only get as close as two points, and their last bid to collect the victory came after Josh McRoberts’ three made it 77-74 with 5:47 to go. Charlotte ran off seven of the next eight points to effectively put the game away, before then putting an exclamation point on the win with consecutive three-pointers to close out the scoring.

The Heat will next be in action on Wednesday night as they travel to Louisville to face the Orlando Magic for a 7:30 tipoff at the KFC Yum! Center.
[xyz-ihs snippet=”Responsive-Ad”]