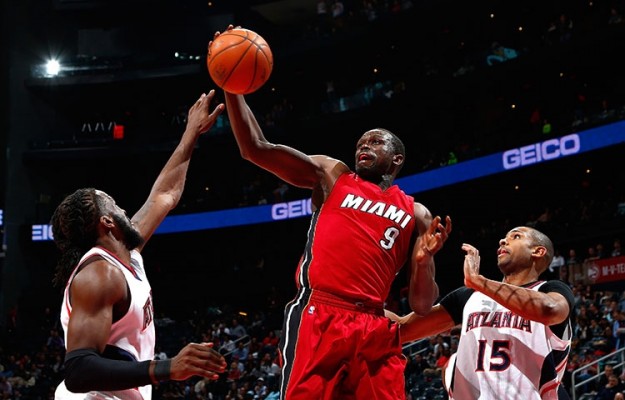 Dwyane Wade, who sat out Wednesday night’s game in Boston with a swollen left knee, returned to the Heat’s starting lineup and scored 13 points on five-of-13 shooting in 22 minutes. According to Heat beat reporter Joseph Goodman, Wade will receive additional treatment on his troublesome knee this weekend:

Dwyane Wade said he will have fluid drained from his left knee when he returns to Miami on Saturday.

Point guard Mario Chalmers had a strong game off the bench with 13 points, five assists and two steals.

Coach Erik Spoelstra was almost prophetic in his pregame comments as the Heat prepared to play the team with the best record in the Eastern Conference: “What’s underrated about them is their defense. Our biggest challenge against them this season has been protecting the ball.”

While four Heat players scored in double figures, the team shot just 39 percent from the field and turned the ball over 18 times. Meanwhile, the Hawks exhibited their trademark shooting and passing attack, converting over 50 percent of their shots for the game and assisting on 31 of 37 made baskets.

The Heat were without the services of center Hassan Whiteside for a second straight game. The 7-footer suffered a laceration on his right hand against the Milwaukee Bucks earlier this week, and his return is unknown.

In comments before the game, coach Erik Spoelstra said he is taking a cautious approach to Whiteside’s injury: “It needs to heal a little more before we take the next step.”

Udonis Haslem started in place of Whiteside and had six points and eight rebounds in 26 minutes. With Chris Andersen also sitting out tonight with his own knee issues, the Heat had no true center to slow down the Hawks’ bigs. Al Horford had 15 points, three rebounds, and four assists, while power forward Paul Milsap had a complete game with 21 points, nine rebounds, four assists and two blocks.

It was a wire-to-wire victory for the Hawks, who led by as many as 26 points in the third quarter before walking off the court with a 13-point win.

If tonight’s game was a potential preview of a first-round matchup between the two teams in the Eastern Conference playoffs, Heat fans should be worried. The Hawks dominated the season series, winning each game by an average of nine points while scoring over 104 points per contest.

A frustrated Wade told reporters in the locker room that the Heat need to add some new wrinkles to their offense to keep the Hawks off balance: “They scout us pretty well. We’ve got to figure out a way to add a few things…let them see a few things different and make a couple of tweaks.”

The Heat lost ground to the Brooklyn Nets (31-40) and Boston Celtics (32-40), both of whom won earlier in the night. Miami, currently in seventh place in the Eastern Conference standings, is ahead of those teams by a game in the loss column.

Friday night marked a disappointing end to Miami’s 4-game road trip on which they went 1-3. The team will fly back to South Beach to face the Detroit Pistons Sunday night.