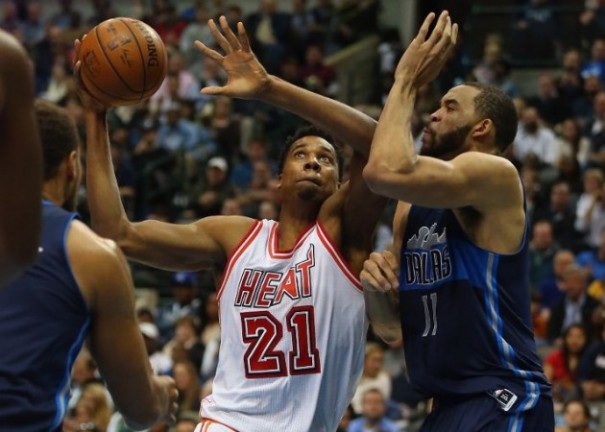 (Dallas, TX) – On the second night of a back-to-back down in the heart of Texas, the Miami Heat (28-22) were able to win another classic contest over the Dallas Mavericks (28-24) on Wednesday night at American Airlines Center.

The victory, which followed Tuesday night’s disappointing 115-102 loss at the hands of the Houston Rockets at Toyota Center, was a great bounce-back victory for the team’s morale.

Heat center Hassan Whiteside, who had missed Miami’s last six games with a strained oblique, made his return to the court quite a memorable one on just his first basket of the game.

The seven-footer broke out a nifty spin move against fellow Mavs center JaVale McGee, only to throw down a filthy one-handed slam dunk right in McGee’s face. The dunk was a thing of beauty, as Whiteside’s teammates who were on the bench quickly jumped up to celebrate.

Whiteside, who currently leads the NBA in blocks per game, had himself quite an efficient outing with 10 points (a perfect 5-of-5 shots made from the field), nine rebounds and five blocked shots.

Power forward Chris Bosh (20 points, 10-of-23 from the field, and four rebounds) and shooting guard Dwyane Wade (18 points, 6-of-19 from the field, eight rebounds, and four assists) also put up very solid performances on the evening.

The Mavs, who had five players score in double figures on the night, were led by legendary 13-time All-Star Dirk Nowitzki’s 28 points, four rebounds and three blocks. Small forward Chandler Parson had 12 points and seven boards, while point guard Raymond Felton scored 10 of his 11 points down the stretch in the fourth quarter.

Dallas center Zaza Pachulia, who set a career-best with his 22nd double-double on the season, finished with 10 points, 15 rebounds and four assists.

Luol Deng, who continues to play very well for the Heat as of late, was clutch down the stretch with 15 points and five boards in the victory.

With the Heat leading the Mavs 87-85 with 1:52 left in the fourth quarter, Deng came up with a very clutch block on Nowitzki in the paint and, shortly after, drained a dagger from behind the arc.

Up next, the Heat will conclude their three-game road trip when they take on the Charlotte Hornets (24-25) on Friday night at Time Warner Cable Arena. The contest, which is scheduled to tip off shortly after 7:00 pm ET, will be broadcast live locally on Fox Sports Sun.
[xyz-ihs snippet=”Responsive-Ad”]