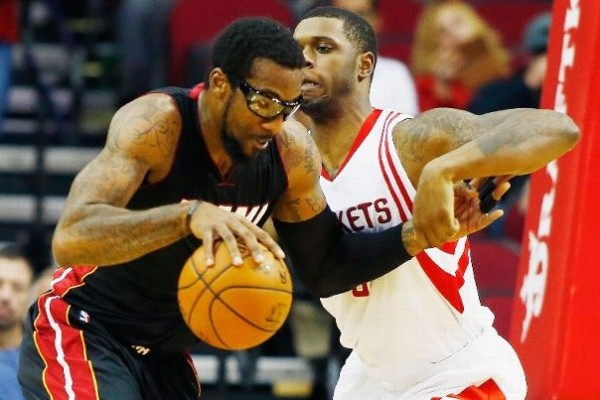 (Houston, TX) – Looking to build on their impressive 105-87 dismantling of the Atlanta Hawks on Sunday, the Miami Heat (27-22) had their four-game winning streak snapped when they fell 115-102 to the Houston Rockets (26-25) on Tuesday night at Toyota Center.

Despite going on a 15-0 run and leading by as many as eight points in the first quarter, the Heat simply couldn’t re-take the lead following a 60-55 halftime deficit.

“You usually get what you deserve in this league,” said Heat head coach Erik Spoelstra. “They deserved to win that game. We did not do enough things.”

Rockets All-Star shooting guard James Harden, who hit a 30-foot three-pointer with 0.6 seconds left before halftime, showed fans why he was the runner-up for last season’s MVP award as he went off for a game-high 26 points to go along with 14 assists, four rebounds and two steals.

“It was a confidence boost for us,” said Harden. “Coming into tonight, we dropped three in a row so we had to get our swag back a little bit. We’ve got to win at home.”

Forward Josh Smith, who has filled in as Houston’s starting center during Dwight Howard’s absence, had a season-high 19 points to go along with four boards and two steals. The Heat had absolutely no answer for Rockets shooting guard Marcus Thornton, who came off the bench to score 18 points (7-of-11 from the field and 3-of-4 from behind the arc), adding five rebounds and three assists in only 22 minutes.

The game was mostly an uphill battle for the Heat, as the Houston offense proved to be too hot to handle for Miami’s defense.

“We missed a lot of chippies (chip shots),” said Wade. “They sped us up some with their small lineups.”

“Our interior passing was a little off today, and I think we were taking quick shots instead of really working the game,” said Bosh after the game. “We know we’re much better than we played tonight. Just because we speed up the pace doesn’t mean we have to take quick shots.”

Heat center Hassan Whiteside’s presence in the middle was definitely missed again tonight, as the seven-footer missed his sixth consecutive game on Tuesday with an oblique strain.

Up next, the Heat will stay in Texas to take on the Dallas Mavericks (28-23) on Wednesday night at American Airlines Center. The contest, which is scheduled to tip off shortly after 8:30 pm ET, will be broadcast live locally on Fox Sports Sun.
[xyz-ihs snippet=”Responsive-Ad”]