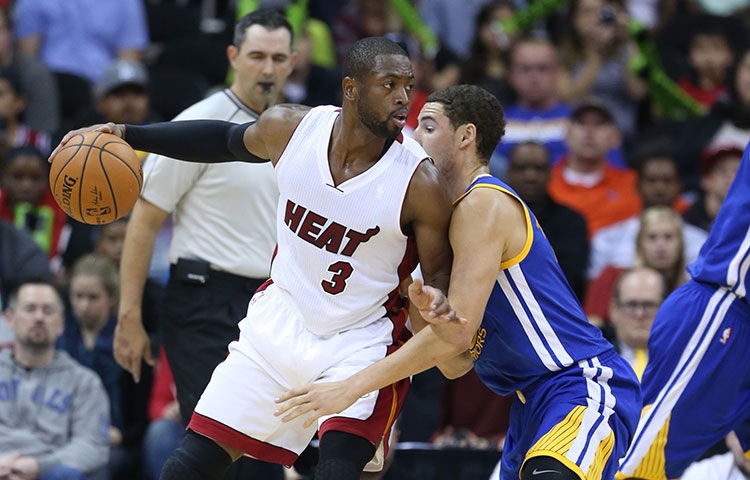 (Kansas City, MO) —  As one of only two teams in the NBA still seeking its first 2014 preseason win, the Miami Heat entered the fourth quarter against the Golden State Warriors on Friday night at the Sprint Center in Kansas City, Missouri, trailing by a dozen points.

Fittingly, a dozen minutes later Miami (1-4) was no longer winless and Golden State (4-1) was no longer undefeated. The Heat outscored the Warriors 32-13 in the final quarter to pull off a 115-108 victory.

“We just want to keep building,” Luol Deng said after the game. “It’s nice to get a win but even in the games we’ve lost we’ve focused on what we need to do to get better. It’s preseason and everybody has got to get their rhythm and get used to each other.”

A little more than halfway into the fourth quarter, Miami took their first lead of the second half on a corner three from Mario Chalmers, who was back in action after missing Tuesday’s game with a hip pointer. One Shabazz Napier “kaboom” later and the Heat were ahead 106-102 with 4:46 to play.

The rally was led primarily by newcomers. Deng and Napier each put in five points, small forward James Ennis contributed four points and small forward Shawne Williams nailed a shot of his own. The foursome led a 23-7 burst.

“I thought in the second half we did a better job of having each other’s back,” Deng said. “It made it a lot tougher for them and they settled for a lot of jumpers.”

Leading the way for Miami was Chris Bosh with 21 points, seven rebounds and a couple assists. Deng and Williams each had 19 points, with Williams pulling down seven rebounds. Also reaching double figures for Miami was Napier with 14, Chalmers with 13, and Wade with 10.

Klay Thompson’s 29 points paced four Golden State players, who reached double figures. David Lee had 24 points and six rebounds, Draymond Green added 13, and Harrison Barnes chipped in with 12. Stephen Curry was held to seven points on 2-10 shooting to go along with seven assists. Overall, Golden State was limited to 29% shooting from long range. The Warriors entered the game leading the NBA in preseason scoring at 113 points per contest.

Williams put the game out of reach with his fifth 3-pointer, with 32 seconds remaining, extending Miami’s lead to 113-106.

“Shawne is great,” said Deng. “When he shoots the ball like that it stretches the floor for us and we can have cuts and everybody is getting wide-open shots.”

Deng and Chalmers led the way in the opening quarter. Golden State took an early 7-2 lead before Miami rattled off 11 unanswered points. In that stretch, Deng knocked down a three, Bosh had back-to-back drives that ended in slams and Wade had a dunk of his own after coming up with a steal.

After entering the game with one 3-pointer made in nine attempts this preseason, Deng connected on his second shot from downtown in the quarter. His shot with 3:08 remaining in the first gave Miami their largest lead at 23-16. Following a timeout, Chalmers stole the ball and flipped in a lay up to extend the Heat’s lead to nine.

A small Warriors spurt was slowed by two Ennis free throws as the quarter closed with the Heat ahead by four.

Then, an 11-4 Golden State run put the Warriors in front. Green’s six points led the way and his one-handed slam, giving Golden State a 38-37 lead with 7:13 left in the second quarter, highlighted the spurt. 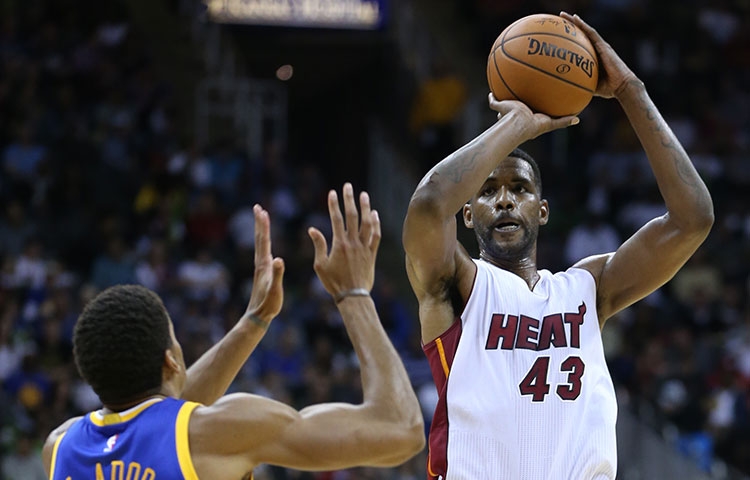 A Shawne Williams 3-pointer, Miami’s fourth of the half, put Miami back in front 40-38 with 6:15 left in the second quarter.

That was the last time the Heat would lead until their fourth quarter flurry.

Lee, who finished the game making all of his 11 shots, led an 11-2 Warriors run. The power forward put in five points on two lay ups and a free throw. Curry’s no-look, behind the back pass to Thompson on a fast break pushed the Warriors lead to seven with 2:58 remaining before halftime.

“I thought in the first half they got a lot of lay ups,” said Deng. “The way our defense is built is trusting each other.”

After Williams connected on another jump shot, Golden State rattled off seven more points in a row, with Lee contributing another five during that burst.

In the last 25 seconds before halftime, Cole split a pair of free throws, Deng stole a Curry pass and tossed it ahead to Wade who converted a lay up with 0.7 seconds left before the buzzer to trim the Heat deficit to nine.

Both teams came out on fire to start the second half. The first four possessions all led to three-point plays, the last of which was the only one that came with a free throw, on a Bosh continuation.

With five minutes remaining in the third quarter, the teams had combined to score 49 points, 25 coming from the Heat. Bosh led the charge for Miami with 10 points, while Williams chipped in a trio of 3-pointers and drew a charge. For the Warriors, Thompson poured in 13 points, including a couple from beyond the arc.

Miami’s defense didn’t slow the Warriors down much for the rest of the quarter. Five Thompson points, including another 3-pointer, preceded four Green free throws, while Napier put in four points, and the Warriors led 89-76 with 2:16 to play in the quarter. The 13-point led tied Golden State’s largest of the game.

The Heat picked up one point before the quarter ended, entering the final quarter trailing 95-83. Chris Anderson provided the highlight during that stretch on a 20-foot straight away jump shot with 56 seconds to go in the third. Those were the Birdman’s only points of the game, accompanying his five rebounds for the night.

After Williams’ final 3-pointer with just over half a minute to play, two Bosh free throws and a Lee lay up ended the scoring.

The Heat hit the hardwood again on Saturday at 8:30 p.m. when they go into San Antonio for a rematch of the 2013 and 2014 NBA Finals against the Spurs.