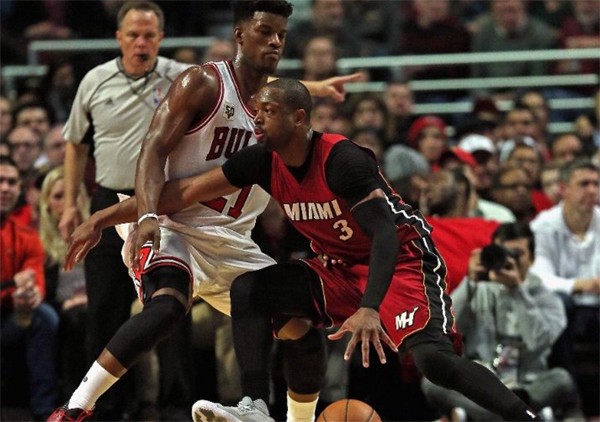 The Heat overcame a lethargic third quarter which saw the team score a season-low 12 points in the period. Despite trailing 68-61 at the end of three quarters, Miami played inspired basketball in the final period to end a four-game losing streak.

Dwyane Wade led all scorers with 28 points on 11-of-21 from the field, while Chris Bosh added 18 points of his own. Wade scored 10 of his 28 points during the decisive fourth quarter.

After trailing for the majority of the second half, the Heat took the lead midway through the fourth at 74-73 as Gerald Green scored on a three-point play after being fouled on a mid-range jump shot. Then, after exchanging leads and ties over the next six minutes, Bosh’s long-range jump shots with 62 seconds remaining put the Heat up for good at 86-84.

After a couple of non-scoring possessions by each team, Wade’s step-back jumper over the Bulls’ Pau Gasol gave the Heat an 88-84 lead with 22 seconds left. Gasol would turn the ball over on Chicago’s next possession to seal the game for Miami.

Despite his costly turnover toward the end of the game, Gasol had a monster game to lead the Bulls with 19 points and 17 rebounds. Nikola Mirotic contributed 15 points, while Jimmy Butler and Aaron Brooks chimed in with 13 points apiece.

Just a month prior, the Heat had the best record in the Eastern Conference. Injuries and inconsistent play have dropped the Heat to the seventh-best record in the conference. Head coach Erik Spoelstra spoke of what has to happen in order for Miami to get back on the right track:

“Our leaders have to lead. It’s Dwyane, Chris Bosh, Udonis Haslem and me.”

Following the win, Wade was asked by Sun Sports’ Jason Jackson on how healthy he felt entering this game:

“I feel better. After the other game in Toronto, I felt better the next day. I continued feeling better, so I just wanted to come out here and be a leader and help lead these guys. I felt like we did that tonight. This was a very good win for us tonight. We needed it bad.”

Hassan Whiteside (oblique injury) sat out Monday night’s game while Goran Dragic was sidelined once again due to a calf strain. Amar’e Stoudemire started in Whiteside’s place and posted eight points and 10 rebounds in a season-high 26 minutes of action. Beno Udrih made his return from a neck injury in 21 minutes of playing time.

Despite the victory over one of the top teams in the conference, Spoelstra warned his team to not become too content after tonight:

“I don’t want anybody to exhale right now. We’re in no position to do that. We need to get out of here, get some rest and get ready for tomorrow night.”

The Heat will continue their road trip when they travel to Barclays Center to play the Brooklyn Nets on Tuesday night. Tipoff is set for 7:30 PM ET and the game will be broadcast locally on Sun Sports.
[xyz-ihs snippet=”Responsive-Ad”]