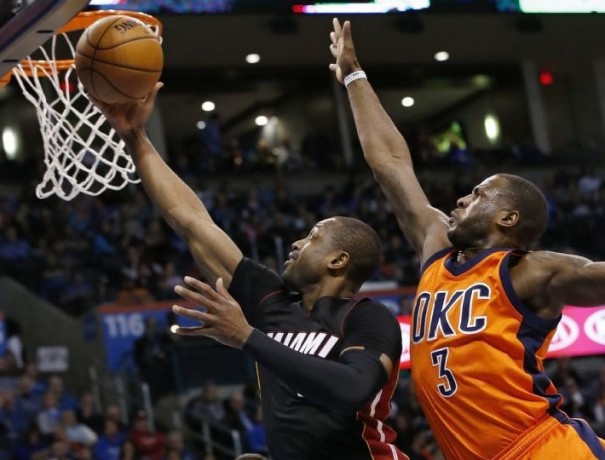 (Oklahoma City, OK) – Running out of gas in the third quarter proved to be devastating to the injury-depleted Miami Heat as they closed out their six-game road trip with 99-74 loss to the Oklahoma City Thunder at Chesapeake Energy Arena on Sunday night.

Miami trailed by four at the break and was twice able to get within a point in the first three minutes after intermission. However, a lethal 17-2 run allowed Oklahoma City the opportunity to maintain a lead they’d extend over the remainder of the game.

A key to the Thunder surge was their 58 percent field goal shooting after Miami got within a point for the final time. In addition, solid ball movement that led to nine assists on their 13 field goals made it 75-58 after three. Any slim hopes of a fourth quarter comeback were dashed when the Thunder notched seven of the first nine points in the final quarter, taking their largest lead of the game at 89-63 with 6:32 left, the first of multiple occasions for that 26-point margin.

“That first six or seven minutes of the third quarter were clearly not at the quality we needed,” said Spoelstra. “The main problem was not being able to show stability in the midst of a storm.”

Dwyane Wade had a team-high 22 points, hitting 9-of-15 from the field while handing out three assists. He had been questionable prior to the game with shoulder soreness, but was one of four Heat players to score in double figures. Within that group, Hassan Whiteside collected a double-double with 14 points and 11 rebounds, while hitting 7-of-9 field goal attempts, and Tyler Johnson added 16 points.

Wade, who turned 34 on Sunday, spoke about why he played:

“I knew the team was shorthanded,” said Wade, who mentioned that the shoulder still had some soreness.

After the game, Bosh praised the game plan of the Thunder:

“They played really good defense today. You really have to give them credit,” said Bosh. “Couldn’t get a couple more inches that I needed.”

The Heat started the game strong, connecting on five of their first nine field goals, but that production quickly dried up with 2-of-11 shooting from the field over the final 7:28 of the period. Oklahoma City had put together a 15-4 run and held a 24-18 advantage by the time the quarter ended.

Miami still trailed by two at the half, despite hitting 53 percent of their field goals in the second period and holding the Thunder to just 31 percent in that category.

Spoelstra was ready to file and forget this contest:

“We showed much better poise and stability in the Denver game,” said Spoelstra. “The reality is, we’ve got to get back to Miami and get healthy.”

The Heat, who finished 2-4 on this trip, scored their fewest points in a game this season and had their biggest losing margin of the campaign as well. They now briefly return home on Tuesday night to host the Milwaukee Bucks in a game set to tip off just after 7:30 p.m. ET. Following that contest, Miami sets off on another five-game road swing beginning with a Wednesday night matchup in Washington.

Bosh spoke of the benefit of getting at least a brief taste of home:

“Thirty-six hours in Miami,” said Bosh. “It will be awesome, and then we’ll be back on the road.”