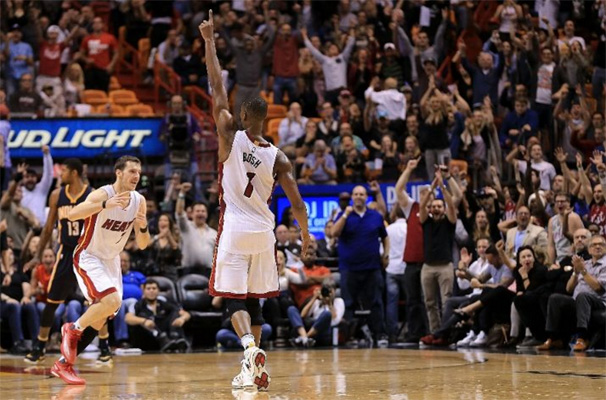 That’s when Heat head coach Erik Spoelstra drew up a play for none other than superstar Dwyane Wade, who delivered on a beautifully executed play.

Wade caught the ball on the inbounds, and off a Chris Bosh screen, cut to the basket for a left-handed layup as the buzzer sounded to send the game into overtime.

The former NBA Finals MVP finished the game with 27 points, eight rebounds, and three assists, as the Heat pulled away from the Pacers in OT by a score of 103-100.

“It felt like a playoff game,” said Wade after the contest. “So I’m glad we found a way to pull it out.”

Bosh continues his torrid streak as he ended the night with a team-high 31 points to go along with 11 rebounds.

Pacers small forward Paul George had a chance to tie the game on a buzzer-beating three-pointer in overtime, but came up short as he ended the night with a game-high 32 points to go along with seven rebounds.

“I was joking with PG, just telling him how it was old times,” Bosh said.

The Heat actually trailed by as many as 18 points in the third quarter as they rallied back with an 18-3 run to eventually take the lead.

“This was classic Eastern Conference basketball.”

Miami actually shot just 38 percent from the field, but won the game with solid team defense throughout the night.

“They’re a good team,” Pacers coach Frank Vogel said after the game. “They’ve got two All-Stars that closed the gap. Eighteen points in the third quarter, those deficits get overcome in the NBA all the time.”