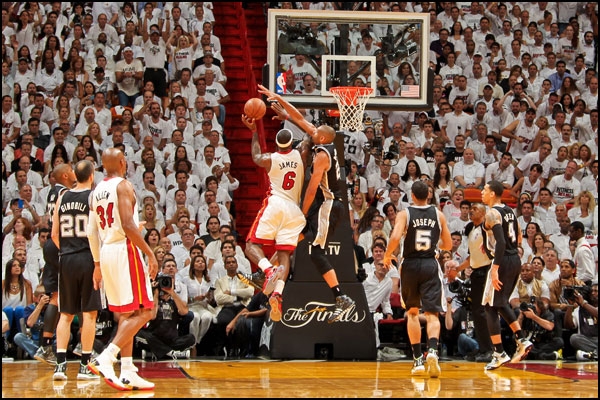 “Well, it’s pretty clear.  There were plays to be made and our offensive inefficiency going down the stretch most of the fourth quarter probably hurt us more than anything.”

Erik Spoelstra was right.  Mario Chalmers jacked up a step-back three in the corner that left Dwyane Wade waving his hands in frustration; Bosh bricked a wide open three pointer; Wade missed a driving layup at the cup; and LeBron James shifted into Magic Johnson mode at just the wrong time.  If the rest of the series is any indication of what the rest of the NBA Finals will be like, Miami is in trouble.  Deep trouble.

San Antonio’s size was simply too much for the Heat to handle in the fourth quarter.

The clash of the East’s and West’s “Big Three” showdown lived up to the hype in South Beach.

In Game One of the NBA Finals, in the quest to hoist the Larry O’Brian Trophy, the Miami Heat squandered the fourth quarter against the San Antonio Spurs in a 92-88 defeat.

After an initial 9-2 run to start the game by San Antonio, Miami settled down, closing both halftime and the third quarter with a three point lead; but in the fourth quarter they were unable to overcome Tony Parker’s 10 points barrage and game-winner that initially looked to be a doomed possession.

“It felt forever, too,” Parker said.  “It was a crazy play.  I thought I lost the ball three or four times.  And it didn’t work out like I wanted it to.  At the end I was just trying to get a shot up. It felt good when it left my hand.  I was happy it went in.”

Parker iced the game on a possession where he was initially guarded by Chris Bosh, followed by help by Wade and James.  Parker evaded a near block by LeBron and let go of the ball with a tenth of a second remaining on the shot clock and banked home a miraculous floater.

The Spurs couldn’t believe it.

“He had LeBron on him,” said Manu Ginobili, shaking his head.

“We were very fortunate.  It looked like [Parker] lost it two or three times.  But he stuck with it. He kept competing.  He gained control of it again.  He got it up there on the rim.  Great effort by Tony, and as I said, we were fortunate,” said Spurs head coach Gregg Popovich.

As expected, Parker exploded out of the gates, eviscerating Miami’s interior and exposing the Heat’s ailing bodies due to the grueling grind of a Game 7 series.  Parker and finishing with 21 points and six assists.

LeBron James had his third career Finals triple-double with 18 points, 18 rebounds and 10 assists, moving him second all-time on the Finals triple double list, trailing none other Ervin “Magic” Johnson.

Although Wade was able to contribute 13 first half points, he finished with just 17 points and was a non-factor in the critical fourth quarter.

Tim Duncan continued his reign as “Mr. Fundamental” finishing with a 20 points and 14 rebounds.

The Heat found itself trailing 88-81 with two minutes remaining until a James layup followed by a trio of Ray Allen three pointers Ray Allen that cut the lead to 88-86 with 1:28 remaining. Unfortunately, Miami was unable to crawl back from the late fourth quarter deficit.

Stifled by the size of the Pacers in the previous series, Chris Bosh was able to get into his grove and added 13 points to go along with five boards but his 6-of-16 shooting was not enough to overcome the Spurs.