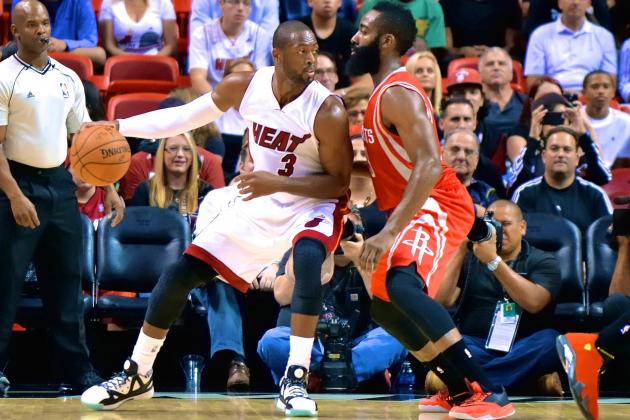 (Miami, FL) — The Miami Heat (3-0) take on the Houston Rockets (4-0) on Tuesday night as they look to remain undefeated at the American Airlines Arena.

While Heat fans are focused on their own team remaining undefeated, the Houston Rockets will look to do the same–as they enter Tuesday’s night matchup in Miami 4-0, following their victory over the Philadelphia 76ers on Monday night, 104-93.

Though Houston remains just one of four teams undefeated one week through the NBA season, all of their victories thus far have come against lowly teams: the Los Angeles Lakers, Boston Celtics, Utah Jazz, and Philadelphia 76ers were four of the worst teams in the league last year.

Tuesday night’s affair with the Heat represents their first real challenge of the season.

On the other hand, Miami has defeated two playoff teams from 2014, the Washington Wizards and Toronto Raptors. However, the Wizards were missing two of their key starters in that game. On Sunday night, the Heat’s victory over the Raptors left Miami standing as the lone team in the East without a blemish on their record.

Coach Erik Spoelstra echoed the value of the victory over Toronto: “It was a good win, particularly having to go through the emotions of playing a very good team.”

The Rockets-Heat matchup will see two high-octane offenses on the court, as Miami enters the game second in the league in offensive rating, while Houston ranks fourth.

The key matchups to watch are between the four superstars involved. In the paint, Chris Bosh will face off with Dwight Howard, while Dwyane Wade will battle with James Harden along the perimeter.

Howard is having a solid start to the season as he’s averaging 15.8 points and 10.8 boards per game. While D12 looks to have regained the athleticism from his Orlando days, Bosh has been in a class of his own through the first week of NBA action. The 6’11” Heat center has averaged 25.7 points and 11.3 boards, while being named the Eastern Conference Player of the Week for the week ending on November 2.

After Bosh was awarded just his second Player of the Week honor since the joining the Heat in 2010, he had the following to say about his improvement as a player in comparison to his days in Toronto:

“I feel like I am a much better player and a much better leader. I try to really lead by example and lead by my voice every day.”

When it pertains to the battle on the perimeter, the Rockets have the Heat beat in that category–Harden is averaging 27.8 points per game with over six assists and six boards on an astounding 13.5 free throws attempts per contest. Wade is having a nice season of his own, notching a double-double in the Heat’s latest victory, posting 19 points, 11 boards and seven assists versus the Raptors.

In regards to Wade playing back-to-back games this season, Spoelstra isn’t jumping the gun on that issue. Via Tom D’Angelo of The Palm Beach Post:

“We’re going to go day to day, but we are able to keep his minutes manageable. But he felt great. I think he looked quicker tonight than last night (versus Philadelphia).”

Though the Rockets are one of the top teams in the Western Conference with the duo of Howard-Harden and a deep rotation that includes the likes of Trevor Ariza, Terrence Jones and Kostas Papanikolaou, the franchise hasn’t won in Miami since 2008.

In the quest to remain unbeaten, the Heat will hope both Danny Granger (hamstring) and Udonis Haslem (quad) are able to suit up for the first time this season. Both players have missed significant time, forcing players such as Bosh and Luol Deng to play nearly 40 minutes in the win over Toronto.

Chris Andersen also missed the game due to a bruised rib. Spoelstra is confident that the 36-year-old power forward will be just fine, according to Ira Winderman of The Sun Sentinel:


“I think he’s in very good shape. Is he able to play his 25 minutes? No. But I’m able to play him certainly probably more than I could last year at this time. He’s lighter. He’s very light. While he didn’t do much basketball work this summer, he was at least fit and he worked on shaving off some pounds as he gets older.”

It is unclear whether Granger, Haslem or Andersen will suit up for Tuesday’s game versus the Rockets.