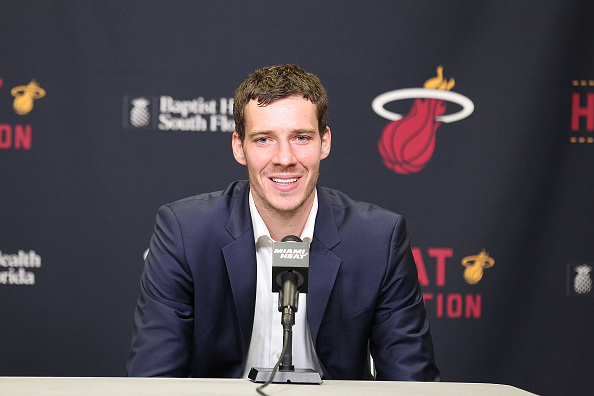 There is little doubt that the biggest offseason priority for the Miami Heat will be to re-sign point guard Goran Dragic.

Dragic announced during the Heat’s final media session of the 2014-15 season that he would opt out of his contract and officially become a free agent during the 2015 offseason. However, that doesn’t mean he won’t return to Miami—it just means that he’ll be on the market receiving offers from other teams.

Dragic has cited several things will factor into his decision, including money, security and the style of play of teams that are interested in him.

The 28-year-old guard had the following to say about a fifth year being tacked on to a contract offered to him by the Heat:

“It’s pretty big. Because every player wants to sign as long as he can. Of course, my goal is to stay in that spot that I’m going to sign.”

In addition to security and money, the veteran guard stressed that style of play will factor heavily into his decision during free agency:

“I mean, of course every offer, we’re going to go through. But I think that the most important thing is the team, who is around me, what kind of style. Because, first of all, I want to be happy, happy to play that style of basketball that I want to play. And I think that’s the main thing for now, not the money.”

Pat Riley acquired the former All-NBA Third Team selection at the trade deadline back in February. The Heat gave up Norris Cole and two future first-round draft picks in the hope that the franchise could lock up Dragic to a long-term contract.

Riley commented on the Dragic situation in his final press conference of the season:

“There has not been any indication, any discussion at all with he or his representatives about anything other than when I made the trade and gave up two picks for him. You roll the dice. But you also feel good about the fact that we’re in a very good position to offer him more than anybody else.”

What Riley is talking about is how the Heat could offer Dragic that fifth year he desires and how the contract could be worth as much as an additional $26.2 million.

The team doesn’t want another season where it has to start Mario Chalmers at point guard because there are no better alternatives. Shabazz Napier likely won’t make a big enough stride to show the organization that he’s a franchise point guard to build around.

The Heat had a franchise point guard this past season—his name was Dragic.

The Slovenian point guard’s ability to excel on the fast break and make the Heat more than a one-dimensional half-court offense cannot be talked about enough. He also keeps defenses honest with his ability to score and navigate through the paint.

At the current moment, the best free agents at the point guard position will be none other than Dragic and Rajon Rondo.

Rondo’s stock is plummeting at a fast pace as his tenure with the Dallas Mavericks has gone sour. Mavericks head coach Rick Carlisle has already gone so far as to say that Rondo probably won’t be back with Dallas next season.

Which means Miami’s options are as follows entering the 2015-16 season—re-sign Dragic, sign an ailing and declining Rondo, draft a point guard in the 2015 NBA draft, or plug Chalmers/Napier in the starting lineup.

I don’t know about you, but the best and only viable option on that list is to re-sign Dragic.

The Heat have yet to even see the starting lineup they envisioned when they acquired the Slovenian guard at the trade deadline. Soon after Dragic was acquired by Miami, Chris Bosh was ruled out for the season due to blood clots in his lungs.

“I would like to see standing strong, Luol Deng, Hassan Whiteside, and Chris Bosh, Goran Dragic, Dwyane Wade, with Mario Chalmers coming off the bench, with Josh McRoberts.”

Josh McRoberts was out for the entire season after December. Luol Deng enters the 2015 offseason with a player option for the 2015-16 season, and it is not yet known whether he will exercise the option or become a free agent like Dragic.

The Heat have not had a true point guard that can stabilize the position since Jason Williams nearly a decade ago. They haven’t had a franchise point guard since Tim Hardaway laced them up even longer ago.

Miami may have to overpay him a bit—it is inevitable because of the demand for point guards and the declining play of Rondo—but they will need to do whatever it takes within reason to re-sign the European point guard.

In a worst-case scenario assuming Dragic is brought back, the starting lineup will feature Hassan Whiteside, Bosh, Dwyane Wade and Goran.

The Heat finally have their franchise point guard. The only thing left is to sign him to a long-term contract.
[xyz-ihs snippet=”Responsive-Ad”]