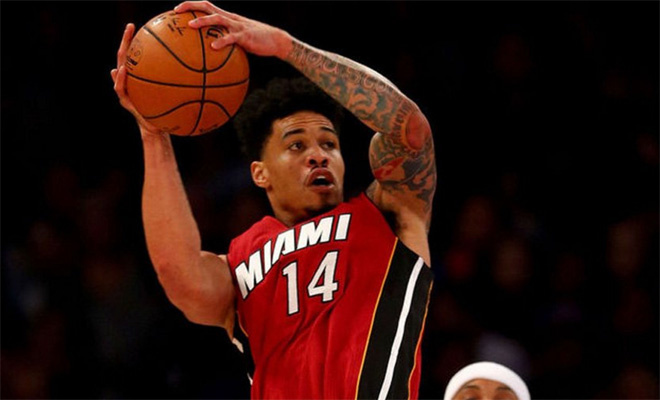 (New York, NY) — The Miami Heat (10-5) defeated the New York Knicks (8-9) by a score of 97-78 for their eighth straight victory in the series on Friday night at Madison Square Garden.

The victory is the longest win streak for the Heat in the series between the two rivals. Though the final score tilted largely in favor of Miami, the game was a close contest for the entire first half—the Heat led just 50-49 at halftime and neither team led by more than seven points.

Gerald Green started his second consecutive game at small forward for the injured Luol Deng (hamstring) and led the team with 25 points on 8-of-14 from the field, including 4-of-8 from beyond the arc. Green’s 12 points within the first six minutes of the fourth quarter helped pushed the Heat lead to as many as 20 points.

Chris Bosh chipped in with 20 points and five rebounds while Hassan Whiteside continued to dominate defensively as he grabbed 14 rebounds and blocked six shots. Dwyane Wade also aided in the offensive attack with 17 points on 7-of-17 from the field.

Green scored 10 points in a three-minute frame from 8:46 remaining in the fourth until there was 5:56 remaining, which turned a 10-point lead into a 20-point one. He converted on two three-point shots and an alley-oop dunk during the stretch.

“Yeah, they brought the veteran approach, what we need from them. On the road where we know where the ball is gonna go, they touched the ball quite a bit. The guys were able to play off of them and their veteran experience and that really settled us offensively more than anything.”

While Green will steal the headlines with his explosive offensive performance, it was the Heat’s throttling defense that was the key to victory—they held the Knicks to just 37.6 percent shooting from the field and 3-of-14 from three-point range. Knicks superstar Carmelo Anthony was held scoreless in the second half, as he finished the night with just 11 points to lead the team on just of 4-of-13 shooting.

Despite the game being closely contested after two quarters, Miami outscored New York 47-29 in the second half. It was their second victory over the Knicks in the past week as Miami defeated New York 95-78 on Monday night.

Kristaps Porzingis, the sensational rookie who has captured a lot of attention for his strong play as of late, was held to just 11 points on 5-of-11 shooting after scoring 20 points versus the Heat on Monday.

Bosh was asked following the game about the Knicks’ No. 4 overall pick:

While it’s Green’s offensive performance that led the Heat, he continued to stress that his focus is improving on defense:

“My main goal is just to focus on defense. Offense is going to come easy. Some days I’m going to hit shots and some days I’m not. But what I have to do, which is a requirement to wear the jersey, is to go out there and keep playing defense and that’s what I’m going to do.”

It is currently unknown whether Deng will play the Heat’s next game on Monday night. The veteran small forward had the following to say in regards to his injury and his return prior to Friday’s game versus the Knicks:

“We’re going to give it a little bit of time and give it a few more days. Just going to go day by day. I really can’t tell you if I’m going to play next game or not.”

The Heat will travel back home to American Airlines Arena for a four-game home stand beginning with Monday night’s game versus the Boston Celtics. Tipoff is set for 7:30 and the game will be broadcast locally on Sun Sports.
[xyz-ihs snippet=”Responsive-Ad”]