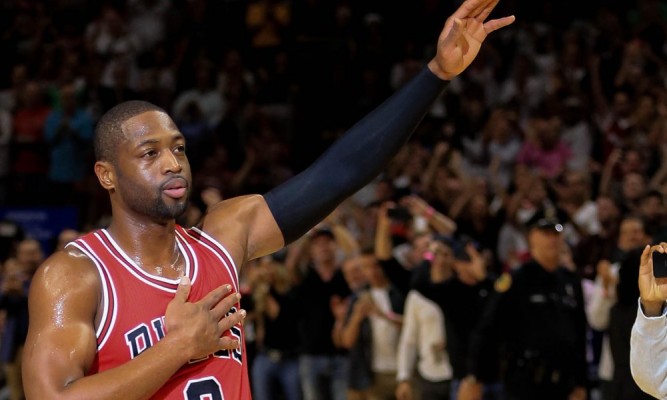 Years before he was joined by the likes of Cleveland Cavaliers forward LeBron James and former Toronto Raptors big man Chris Bosh, Dwyane Wade had helped bring the Miami Heat its first ever NBA championship.

Once Wade was joined by James and Bosh to form Miami’s Big 3, he helped bring two more Larry O’Brien trophies to Miami, cementing him as one of the franchise’s best players ever. The 2006 NBA Finals MVP had played in Miami for 13 years before deciding to depart for his hometown Chicago Bulls where he is currently playing alongside All-Star forward Jimmy Butler for the 2016-17 season.

Now, as Wade moves towards the end of his career in Chicago, he’s still apparently keeping tabs on what he left behind in Miami. In a recent interview with Adrian Wojnarowski of The Vertical, Wade discussed his ongoing relationship with his long-time team and how he views the organization now:

The three-time NBA champion also joked about how he and the other people around him often forget that he left the Heat at all:

“I think it’s still there,” Wade said. “Like, there’s times where in my mind, if I look at the schedule and if see the Heat is playing someone, say, ‘Heat versus Denver,’ I’m like, ‘Dang, we got Denver?’ It’s in my mind. I mean, 13 years. And it’s not even just me, it’s people around me. ‘Hey, man, you coming to the city?’ I’m like, ‘Uh, no, that’s probably the Heat. The Bulls are somewhere else.'”

With the Heat surging off of their recent 13-game win streak, Wade may now find himself competing with his old team for a playoff spot as the Heat are now just two games behind the Bulls for seventh place in the Eastern Conference.
[xyz-ihs snippet=”Responsive-ImagenText”]